The gifting of 75 ambulances also marks 75 years of India's Independence, the Indian Embassy in Nepal said. 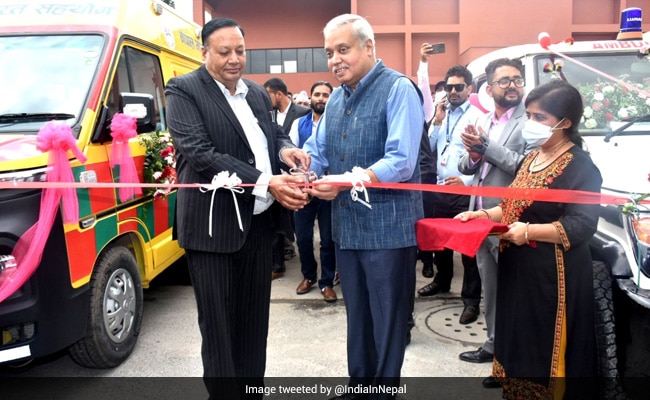 In 2021, India had gifted 39 ambulances equipped with ventilators to Nepal.

India on Sunday gifted 75 ambulances and 17 school buses to Nepal as part of its ongoing efforts to build on the "robust and longstanding" partnership between the two countries and help the Himalayan nation bolster its infrastructure in healthcare and education sectors.

India's newly-appointed Ambassador Naveen Srivastava handed over the keys of the vehicles in the presence of Devendra Paudel, Nepal's Ministry of Education, Science and Technology.

The gifting of 75 ambulances also marks 75 years of India's Independence, the Indian Embassy in Nepal said.

"The gifting of ambulances and school buses is part of the very robust and strong development partnership between the two countries," Mr Srivastava said.

This initiative has been one of the long-standing traditions of the Indian government under the Nepal-India Development Partnership Programme to bolster efforts of the Nepal government to strengthen its infrastructure in health and education, he added.

The 75 ambulances and 17 school buses will be handed over to various governmental departments and NGOs working in healthcare and education sectors in various districts in Nepal, the Indian mission said.

In 2021, India had gifted 39 ambulances equipped with ventilators to Nepal as part of its efforts to help Kathmandu in its fight against the COVID-19 pandemic.

Similarly, in 2020, India had gifted 41 ambulances and six school buses to Nepal on the occasion of the 151st birth anniversary of Mahatma Gandhi.

Nepal is important for India in the context of its overall strategic interests in the region, and the leaders of the two countries have often noted the age-old "Roti Beti" relationship.

The land-locked country relies heavily on India for the transportation of goods and services.

Nepal's access to the sea is through India, and it imports a predominant proportion of its requirements from and through India.

The India-Nepal Treaty of Peace and Friendship of 1950 forms the bedrock of the special relations between the two countries.