India Coronavirus: The next wave is likely to be far smaller than the second wave that peaked at a record 400,000-plus daily cases on May 7 and declined sharply thereafter. 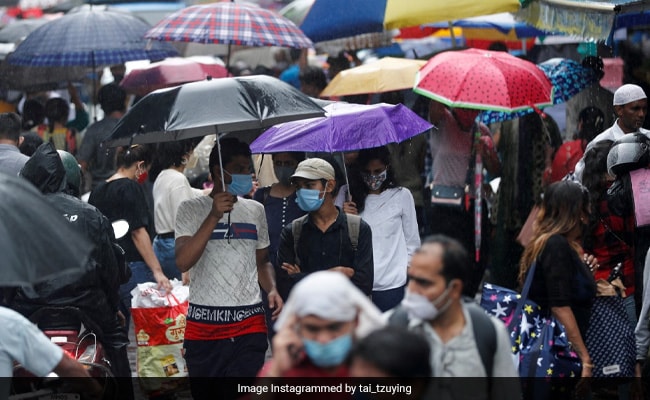 The country may see a worsening of its outbreak as soon as this month, according to experts.

India is likely to see a rise in Covid-19 infections building into a new -- though smaller -- virus wave that may peak in October, according to a mathematical model by researchers who accurately predicted the tapering of a brutal surge of cases earlier this year.

The country may see a worsening of its outbreak as soon as this month, with the next wave peaking in the best-case scenario with less than 100,000 infections a day, or nearly 150,000 in the worst scenario, according to estimates by researchers led by Mathukumalli Vidyasagar and Manindra Agrawal at Indian Institute of Technology in Hyderabad and Kanpur respectively.

States with high Covid rates, such as Kerala and Maharashtra, could "skew the picture," Vidyasagar told Bloomberg in an email.

The next wave is likely to be far smaller than the second wave that peaked at a record 400,000-plus daily cases on May 7 and declined sharply thereafter. But the forecast still underscores the need for India to accelerate its vaccination campaign, deploy surveillance methods to catch emerging hotspots and stay vigilant through genome sequencing given the potential for new variants to emerge. 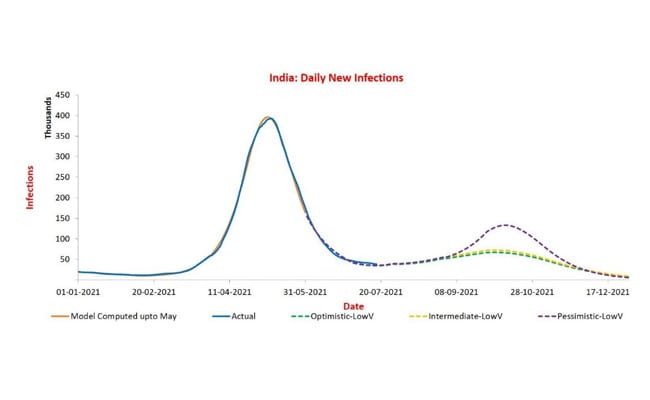 Experts are concerned about complacency setting in as people resume social and business activity in the face of waning infections. India's first outbreak last year ebbed with limited damage, leading to a quick resumption of local travel and large-scale festivals that drove the emergence of a devastating second wave in March. With hospitals and crematoriums overwhelmed, researchers estimate that as many as 5 million people may have been killed in that outbreak. The government estimates of total Covid-related fatalities so far is 424,351.

That last wave also lead to high levels of natural immunity in the country's nearly 1.4 billion people -- a factor that could blunt the impact of the next surge. A national antibody survey by the Indian Council of Medical Research study last month found that two-thirds of Indians above the age of six had been exposed to the coronavirus.

Five months after the last wave started, daily infections in India have plateaued at around the 40,000 daily mark. For the past five days, roughly half the new cases are coming from the southern state of Kerala, making it potentially the next hotspot.

Daily cases have grown persistently through July in Kerala and a few smaller north-eastern states, said Paul Kattuman, professor in the Judge Business School at the University of Cambridge, which has developed a Covid-19 tracker for India. But a few states also saw "short-lived flare-ups in July which abated relatively quickly," putting the country overall in "a steady state" for now. 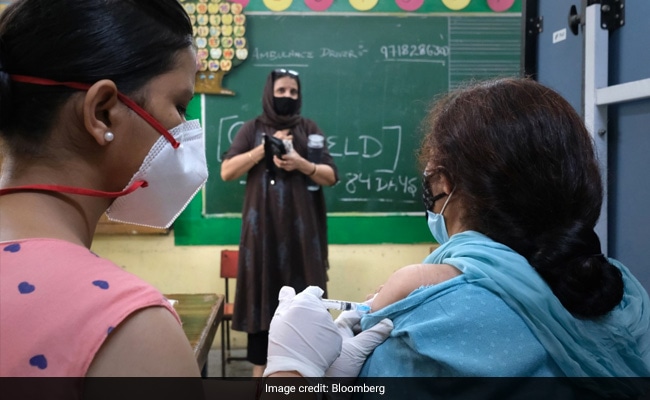 A health worker administers a dose of the Covishield Covid-19 vaccine, developed by Oxford-Astrazeneca Plc. and manufactured by Serum Institute of India Ltd., at a vaccination center in New Delhi. (Bloomberg)

"If infection begins to increase in a few large states, the present balance will tip, and cases are likely to begin growing again in the country as a whole," Kattuman said. "We might expect to see a slow-burn in the country for a duration -- this can be expected to last till vaccination coverage is sufficiently high to induce herd immunity."

India has so far administered 470.3 million vaccine doses, but only 7.6% of the population is fully vaccinated, according to Bloomberg's vaccine tracker. The relatively slow uptake has added to concerns that the country may not be fully geared for the next wave.

The central government led by Prime Minister Narendra Modi says it is now better prepared for further outbreaks and that future waves will not have the same impact on the economy as before.

Public health authorities need to conduct air and sewage water surveillance to detect virus clusters across city neighborhoods, according to Ram Vishwakarma, an adviser at India's Council of Scientific & Industrial Research. This would catch potential infections before they escalate to hospital emergency rooms.

"Sewage water surveillance is the first indication that you start getting from a particular area," he said at a conference on July 28.

Stepping up public health efforts and avoiding past mistakes will be key if India wants to save lives and livelihoods when the next wave descends.

"This is the period which is the most critical because the next wave is imminent," Vishwakarma said.