"Good To Be Back": Kiran Mazumdar Shaw Attends Office For First Time Since March

The Biocon chairperson, in a recent interview to NDTV, had called for bold economic and regulatory reforms to boost the economy. 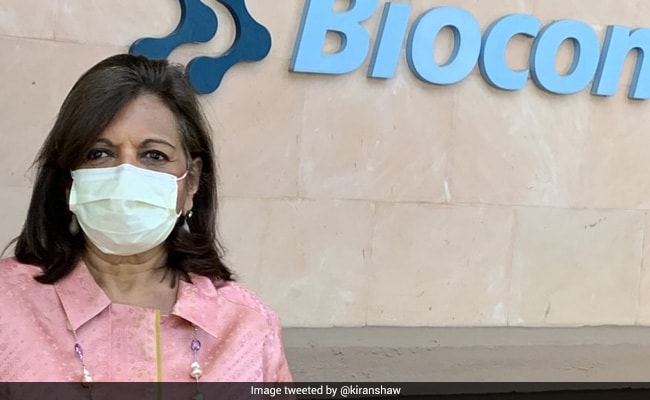 Kiran Mazumdar Shaw said that she had last attended office on March 24.

This is how Biocon Chairperson Kiran Mazumdar Shaw announced on Twitter that she has started attending office for the first time since the lockdown was announced.

Ms Shaw tweeted a picture of herself with a mask outside her office, and captioned: "My first day at the office since the March 24th - so good to be back!"

My first day at the office since the March 24th - so good to be back! pic.twitter.com/fPmeNK1HyA

The Biocon chief had last attended the office on March 24. A day later, Prime Minister Narendra Modi had announced a nationwide lockdown to control the spread of coronavirus. All but essential services were shut across the country, effectively putting over a billion people indoor.

But gradually business establishments have been given permission to open their operations but with limited staff.

The entrepreneur, in an interview to news agency PTI, had said that the ongoing lockdown was "very important and absolute need of the hour".

The Biocon chairperson, commenting on the stimulus package announced by the government, had called for bold economic and regulatory reforms to boost the economy.