S Jaishankar made the comments in presence of Chinese Foreign Minister Wang Yi, Russian Foreign Minister Sergey Lavrov, Pakistan's Bilawal Bhutto and his counterparts from other member nations of the influential grouping. 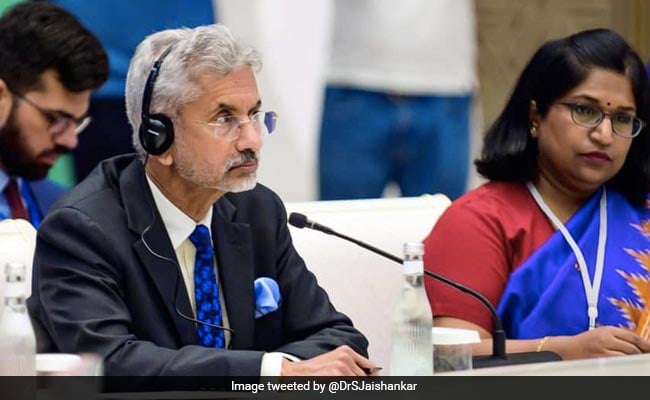 There is an urgent need to address the global energy and food crisis triggered by disruptions arising out of the COVID-19 pandemic and the Ukraine conflict, External Affairs Minister S Jaishankar said at a meeting of the SCO in Tashkent on Friday.

Jaishankar made the comments in presence of Chinese Foreign Minister Wang Yi, Russian Foreign Minister Sergey Lavrov, Pakistan's Bilawal Bhutto and his counterparts from other member nations of the influential grouping.

In his address, the external affairs minister also reiterated India's position on Afghanistan and highlighted its humanitarian support including supplies of wheat, medicines, vaccines and clothing.

Jaishankar also underlined the potential of Chabahar port for the economic future of the Shanghai Cooperation Organisation (SCO).

The foreign ministers of the grouping held extensive deliberations on pressing global issues and reviewed preparations for the upcoming summit of the grouping in Samarkand that is expected to be attended by Prime Minister Narendra Modi and other leaders of the bloc.

"Participated in the SCO Foreign Ministers' Meeting at Tashkent. Highlighted that world faces an energy and food crisis due to disruptions from the Covid pandemic and Ukraine conflict. This needs to be urgently addressed," Jaishankar tweeted.

He said India will give the "fullest support" for the success of the Samarkand summit.

"Reiterated India's position on Afghanistan and highlighted our humanitarian support: wheat, medicines, vaccines and clothing. Underlined the potential of Chabahar port for SCO's economic future," Jaishankar said in another tweet.

The SCO, seen as a counterweight to NATO, is a key economic and security bloc and has emerged as one of the largest transregional international organisations.

India and Pakistan became its permanent members in 2017. SCO was founded at a summit in Shanghai in 2001 by the Presidents of Russia, China, Kyrgyz Republic, Kazakhstan, Tajikistan and Uzbekistan.

India was made an observer at the SCO in 2005 and has generally participated in the ministerial-level meetings of the grouping which focus mainly on security and economic cooperation in the Eurasian region.