In UP, Police Torture Migrants Who Missed Out On Masks

UP Lockdown4: The rough and ready punishment had started after the migrants were caught walking without masks on a road near a railway crossing in Hapur district. 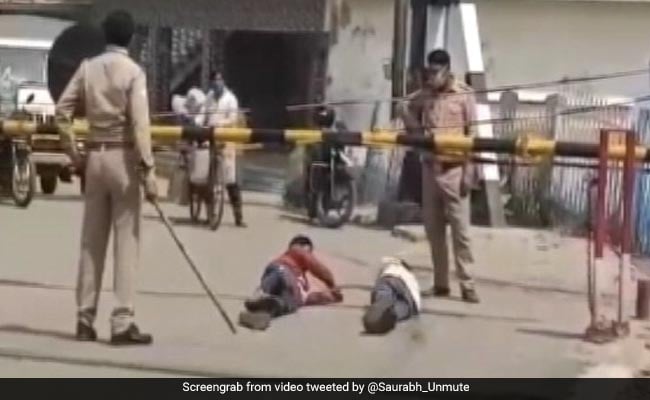 UP Police: The torture by police adds another dimension to the challenges faced by the migrant labourers

Two migrant labourers stretched out on a metalled road in the boiling heat, rolling from end to end, a couple of policemen, using batons on them if they stop. A video of this torture is being widely circulated in Uttar Pradesh, providing yet another facet of the plight of the migrant labourers, whose desperate exodus has been one of the most powerful images of the countrywide lockdown.

The rough and ready punishment had started after the migrants were caught walking without masks on a road near a railway crossing in Hapur district.

In the video, the police can be seen monitoring their progress from one end of the road to the other, shouting and using batons the moment they stop. The situation is being watched by a number of people, many of whom can be seen clicking videos. But no one objects. Some even jeer and laugh.

Sources said after the video was widely circulated, the policemen involved were sent to the police lines and senior officials ordered an inquiry against them.

The torture by the police adds another dimension to the challenges faced by the migrant labourers.

In Uttar Pradesh's Amroha two migrants jumped into the Ganga river yesterday after they saw policemen coming towards them. One of them died.

Since the lockdown started on March 25, millions of migrant labourers have been trying to make their way home as jobs and income dried up overnight. In absence of any transport, they had taken the highway, pushing the Centre to ask states to seal borders.

Earlier this month, as the Centre allowed movement of migrants by bus and train, the numbers on the road multiplied. Many bought themselves seats on illegal trucks, paying thousands. Those who could not afford that, continued to go on foot.

Over the last weeks, hundreds have died – some of exhaustion, other in accidents on the highway.