The fact is, India is only the third country in the world after the US and Israel to undertake a surgical strike of this kind, Amit Shah said. 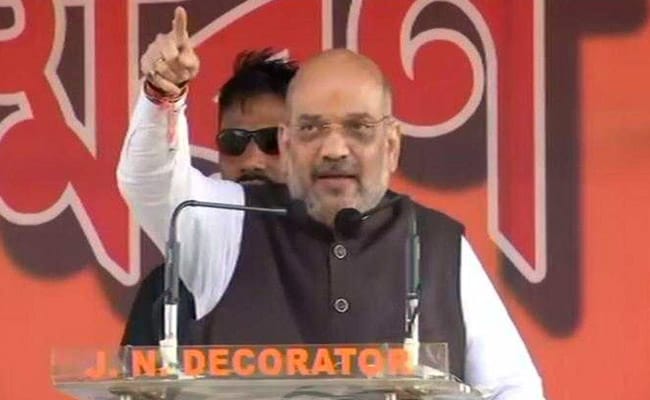 BJP president Amit Shah today took a dig at Congress chief Rahul Gandhi for raising questions about surgical strikes, saying with his affinity to RJD supremo Lalu Prasad he will appreciate only fodder and not such a military operation.

In an apparent reference to speculation about Bihar Chief Minister Nitish Kumar feeling uncomfortable in the BJP-led coalition and mooting return to the Grand Alliance which comprises the RJD and the Congress, Mr Shah dismissed any such possibility saying detractors must not harbour many hopes as Mr Kumar is not going to side with the corrupt.

"With his affinity to RJD supremo Lalu Prasad, he will appreciate only fodder and not a military operation of this nature," Mr Shah said, taking potshots at Mr Gandhi for raising questions on surgical strikes.

The fact is, India is only the third country in the world after the US and Israel to undertake a surgical strike of this kind. This showed the strength of the country, he said addressing a function of BJP office bearers here.

The BJP chief launched a blistering attack on the Congress, saying it had done nothing during its rule of four generations except promoting corruption while the Narendra Modi government has brought about all-round development and enhanced prestige of the country in only four and a half years.

Even under an economist Prime Minister Manmohan Singh, the Congress had rendered the economy of the country into a bad shape and then it was left to the son of a tea vendor, PM Modi, to bring it back on rails and develop it into the fastest growing economy in the world, Mr Shah claimed.

He said under the UPA dispensation, Bihar had received only Rs 1.93 lakh crore while under the NDA rule the state has got Rs 4.33 lakh crore. Besides, this money was reaching the people at the ground level and was not being misappropriated as was done in the case of the fodder scam.

Hitting out at the Grand Alliance comprising the Congress and the RJD in the state, he said its only agenda is removal of PM Modi while the NDA is working for eradication of poverty, corruption and unemployment.

Mr Shah said the BJP had made a humble beginning with only 10 members in Jan Sangh and now has 11 crore members spread across the country, adding it is a party wedded to an ideology, for which the party cadres are making all possible sacrifices in different parts of the country.

The BJP is in power in 19 states as well as at the Centre, he said and called upon party workers to work for BJP rule in all the remaining states as also for return of Narendra Modi by a thumping majority in the 2019 Lok Sabha polls.

He also said that the movement for creating an India free from Congress had its beginning in Bihar when Jayaprakash Narayan led the anti-Emergency campaign.

"I am sure the people of Bihar will keep that spirit alive and support the NDA so that it wins all the 40 seats in the state," Mr Shah said.

He also dismissed efforts made by regional parties like the SP, the BSP, the RJD and the TMC to form an anti-BJP front, with the Congress throwing in its support, saying "we defeated them all even in 2014 when they all were arraigned against us. Moreover, the NDA is going strong. If we lost Chandrababu Naidu, we got Nitish Kumar back into our fold."

Mr Shah, who was previously the party's national general secretary in-charge of Uttar Pradesh, also said, "I know the state well. We had got 73 seats last time and our tally may go only higher this time, even if Akhilesh, Mayawati, RLD, Congress all of them come together."

Earlier, he addressed a meeting of party functionaries, including members of its social media and IT cells at an adjacent conference hall.