Congress chief Rahul Gandhi was targeted by the BJP yesterday after he referred to the Jaish-e-Mohammed chief as "Masood Azhar ji". 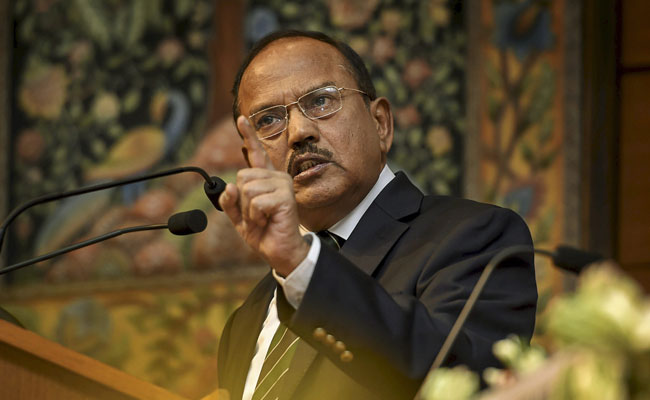 The Congress has alleged that Ajit Doval was instrumental in releasing Masood Azhar.

Amid an escalating war of words between the BJP and the Congress over India's most wanted terrorist, Masood Azhar, the Congress today brought out fresh ammo to attack the ruling party - a 2010 interview of National Security Advisor Ajit Doval. The party claimed that the top officer blamed then BJP-government for releasing the terrorist two decades ago.

The Congress cited the old interview to also accuse Ajit Doval of giving a ''clean chit'' to Masood Azhar. Mr Surjewala highlighted a portion of Mr Doval's interview in which he is quoted as saying: " Masood Azhar doesn't know how to fabricate an IED. Neither he is a marksman".

1 Masood doesn't know how to fabricate an IED.
2 Masood is not a marksman.
3. After releasing Masood, tourism in J&K has gone up by 200%#BJPLovesTerrorists
2/n pic.twitter.com/dh2vvmFQk9

Mr Doval, in the interview, praised the real "nationalistic policy of Congress-UPA to tacke terror, the spokesperson claimed.

Congress chief Rahul Gandhi was targeted by the BJP yesterday after he referred to the Jaish-e-Mohammed chief as "Masood Azhar ji". "You might remember Masood Azhar. During the previous government of the 56-inch people, today's NSA (National Security Advisor) Ajit Doval went in an aircraft with Masood Azhar ji and handed him over," Mr Gandhi said at a party function in Delhi.

The BJP, in its counterattack, picked on Mr Gandhi, with the hashtag #RahulLovesTerrorists.

Masood Azhar and two other terrorists were released from India in 1999 by the Atal Bihari Vajpayee government in exchange for the passengers held hostage on board IC-814 flight hijacked to Kandahar in Afghanistan. The three terrorists were freed after negotiations with the hijackers, in which Mr Doval was involved, failed.

Azhar formed Jaish-e-Mohammed after his release from jail. Since then, Jaish has been involved in terrorist attacks in India.

The Congress has alleged that Mr Doval, believed to be a confidante of PM Modi, was instrumental in releasing Jaish-e-Mohammed (JeM) chief Masood Azhar.

PM Modi please tell the families of our 40 CRPF Shaheeds, who released their murderer, Masood Azhar?

Also tell them that your current NSA was the deal maker, who went to Kandahar to hand the murderer back to Pakistan. pic.twitter.com/hGPmCFJrJC

It was this decision, Rahul Gandhi claimed, that allowed the Pakistan-based terrorist to orchestrate the killing of 40 CRPF soldiers in Jammu and Kashmir's Pulwama last month.