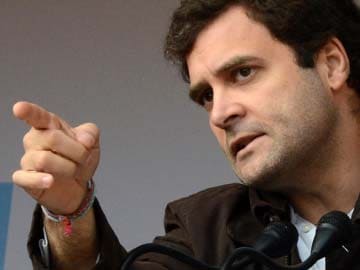 At a meeting in the party's war-room, Union minister Rajeev Shukla raised the chaiwala remark made by Mani Shankar Aiyar against Narendra Modi, the BJP's choice for Prime Minister.

According to sources, Mr Gandhi, who is the vice president of the Congress, said, "It is wrong to make personal attacks on the Opposition." However, just hours after Mr Aiyar's comment, Mr Gandhi had singled him out for praise at a party gathering attended by thousands of workers and its top most leaders.

At that Congress conclave last month, Mr Aiyar, a parliamentarian, had said, "There is no way he can be Prime Minister in the 21st century... but if he wants to come and distribute tea here we can make some room for him."

The BJP and Mr Modi have, in his campaign for the country's top job, been highlighting his humble origins and his early days as a tea seller at train stations.

Mr Modi in speeches refers to Mr Gandhi as "shahzaada" or prince to deride the 43-year-old as a dynast who has little more to offer than his famous last name.

Mr Gandhi spent an hour this evening meeting with spokespersons from the Congress who will represent the party on television debates and other platforms. The session comes just days after Mr Gandhi granted his first television interview in 10 years, with largely negative reviews.

He advised his colleagues today to assimilate facts to diminish Mr Modi's claims that he is responsible for transforming Gujarat, the state he as governed since 2001, into an economic powerhouse.

Senior Congress leaders like Ghulam Nabi Azad, P Chidamabaram, Mukul Wasnik, among others will travel across the country to defend UPA's development record and expose loopholes in the claims made by the BJP regarding the Gujarat model of development.