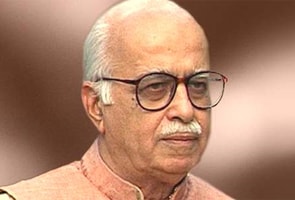 New Delhi: Senior BJP leader LK Advani has lashed out on his blog again. This time he has taken on the Emergency Rule of 1975-1977 and said " Emergency of 1975 akin to Nazi Rule."

Advani on his blog slammed the Congress party while criticising a 172-page book published by the party.

Advani says there is minimal reference of Emergency period in the book titled "Congress and the making of Indian nation."

Following are a few excerpts from his blog

The period of the emergency saw the suspension of normal political procedures and fundamental rights, arrests of the leaders of the Grand Alliance, and enforcement of press censorship and strict discipline. Extreme communal and leftist organisations were banned. More than one lakh people were arrested over the 19 months of the Emergency. Powers of the judiciary were reduced drastically.  Unlimited state and party power was concentrated in the hands of the Prime Minister.

Vast sections of the population welcomed it initially since general administration improved. But, civil rights activists took exception to the curbs on freedom of expression and personal liberties. Unfortunately, in certain spheres, over-enthusiasm led to compulsion in enforcement of certain programmes like compulsory sterilization and clearance of slums.

Sanjay Gandhi had, by then, emerged as a leader of great significance. It was due to his support to family planning that the government decided to pursue it more vigorously. He also promoted slum clearance, anti-dowry measures and promotion of literacy but in an arbitrary and authoritarian manner much to the annoyance of the popular opinion."

These two curt paragraphs are preceded by two full pages about factors leading to the emergency in which Jaya Prakash Narayan's "extra-constitutional and undemocratic movement" on the one hand and the Allahabad High Court's verdict on the other hand, charging Smt Gandhi with violating the election law to win her seat and invalidating her election, have been identified as the two factors which led to the Emergency.
Comments
LK AdvaniEmergency ruleCongress party book