The facelift for the Shreenathji (Shree Krishna) temple in Manama will kick off later this year. 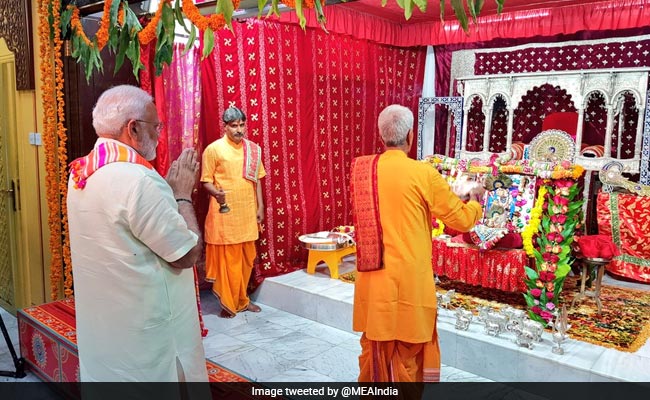 PM Modi offers prayers at the Shreenathji Temple in Manama.

PM Modi, the first Indian Prime Minister to visit the key Gulf nation, offered prayers at the Shreenathji Temple in Manama, the oldest temple in the region, and also the 'prasad'' that he bought with the RuPay card after launching it in the UAE on Saturday.

Prime Minister then unveiled the plaque, thus officially launching the redevelopment project of the iconic temple.

"Thank you Bahrain for the warmth and affection. PM @narendramodi concludes his historic visit with prayers at the 200 years old Shreenathji Temple in #Manama, the oldest temple in the region. The temple reflects the pluralism of Bahraini society," External Affairs Ministry spokesperson Raveesh Kumar said in a tweet.

The facelift for the Shreenathji (Shree Krishna) temple in Manama will kick off later this year.

The USD 4.2 million redevelopment project will be on a piece of land measuring 16,500 square feet and the new four-floor structure covering 45,000 square feet will have an overall height of 30 meters.

The heritage and the 200-year-old legacy of the temple will be highlighted in the redevelopment and the new iconic complex will house the sanctum sanctorum and prayer halls.

There are also facilities for traditional Hindu marriage ceremonies and other rituals, promoting Bahrain as a wedding destination and boosting tourism.

PM Modi arrived in Manama on Saturday, the first ever by an Indian Prime Minister to Bahrain.