While Assam took out rally with 3.5 km long national flag, Gujarat took out the Tiranga Yatra with 1,100 feet-long flag. 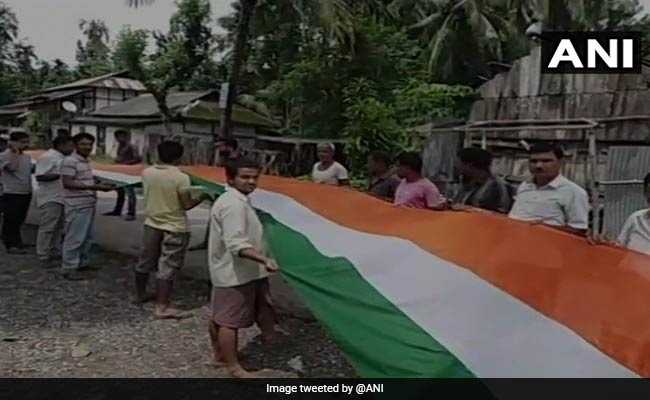 The large flags were made to arouse national pride among the youngsters.

In Assam's Goreswar, a local club on Wednesday took out a rally with a 3.5 km long national flag to celebrate the 72nd Independence Day. The club members along with hundreds of people held the
giant flag above their heads while they were moving on the main thoroughfare.

The large flag was made to arouse national pride among the youngsters and honour the Assam Athlete Hima Das, who is the first Indian to win a gold medal in a track event at the World Junior Athletics Championship in Finland this year, said a club member AP Oli.

The cotton flag was made by 45 members of the club, stitched by eight tailors who did not charge any money for their labour and supported the Baksa district administration besides local politicians, said another member Nayan Newar.

The District Administration of Kamrup Metropolitan District, Guwahati, has appealed to the people not to use plastic flag which violates the 'Flag Code of India, 2002'.

The use of plastic flag amounts to showing disrespect to the National Flag", said a district administration statement.

In Gujarat too, a 1,100 feet long national flag was unfurled in Surat. Watch its video here:

Thousands came out on street to cheer and celebrate Independence Day. Enthusiasm was at its peak and people shared their pictures with the grand flag on social media.

An 1,100 feet-long, 9 feet-wide national flag was unfurled with thousands of people taking part in a 5 km-long 'Shaan-e-Tiranga' rally, organised by the Agrawal Vikas Trust. The idea behind the rally was to deliver the message that nationalism was greater than any religion as people from various religious communities came together to take part in it.

This was the biggest 'Tiranga Yatra' organised in Gujarat so far. The flag was made from a 5,000 meter-long cloth, and it took 12 days for 200 people to produce the flag.

The dyes used in the making of the flag were specially imported from Germany. Speaking to ANI, president of the trust's women wing Deepa Kediya said, "We have been preparing for nearly three months for this rally. Our Yuva Shakha (youth wing) has contributed a lot towards this rally. We have been supported by around 125 NGOs for this rally."

Elsewhere, the Attari-Wagah border, in Amritsar, has been illuminated with saffron, white and green, the three colours of the national flag. In Delhi, government offices including Parliament house, Vayu Bhawan, North and South Blocks have also been illuminated with the tricolours. Mumbai's Chhatrapati Shivaji Maharaj Terminus and Moradabad railway station, among others, have also been brightly lit up.