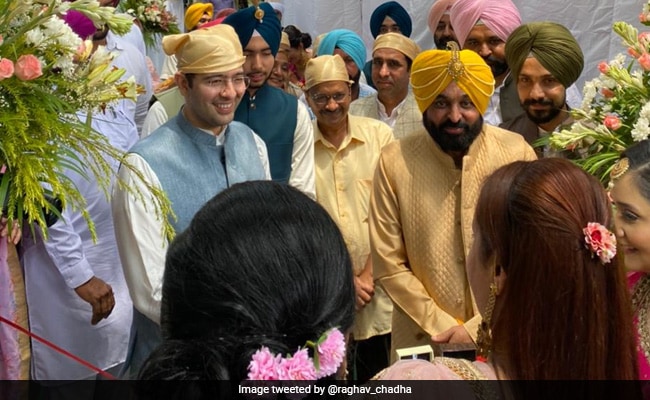 Rajya Sabha member Raghav Chadha gushed about being on groomsman duty as Punjab Chief Minister Bhagwant Mann married Gurpreet Kaur, a doctor, in a private ceremony in Chandigarh today. “I've been the organiser,” he told NDTV, “It's a happy occasion for the Mann family after a long time. The happiest person today is his mother.”

Aam Aadmi Party boss and Delhi Chief Minister Arvind Kejriwal was among the attendees at what Mr Chadha described as “a sweet and small affair with just close family and friends”.

“It was an emotional moment for me to see Mr Mann so happy,” said the 33-year-old MP, who has called Mr Mann his "elder brother".

Mr Chadha also spoke about how “everyone is now asking" about his marriage plans — something he cheekily posted about on social too. “My mother is after my life… Now I will get married soon hopefully."

This is the second marriage for Bhagwant Mann, 48, and comes seven years after divorce with his first wife. They have a son and a daughter, who live with the mother in the US.

Gurpreet Kaur, 32, is from Haryana's Kurukshetra district and knew Mr Mann and the family, from Punjab's Sangrur district, for some years.

“Mr Mann has made a wise choice,” said Mr Chadha, “The bride is a wonderful person, a physician.”

On the buzz inside the chief minister's home and at the gurdwara where the Anand Karaj ceremony took place, Mr Chadha said, “All the usual wedding rituals like 'joota churai' happened... We had a lot of sweets.”

Less than four months ago, Bhagwant Mann became Punjab's Chief Minister after the AAP won a massive victory with 92 of 117 seats.