"If Sati And Dowry Banned, Why Not Triple Talaq": Smriti Irani Asks House 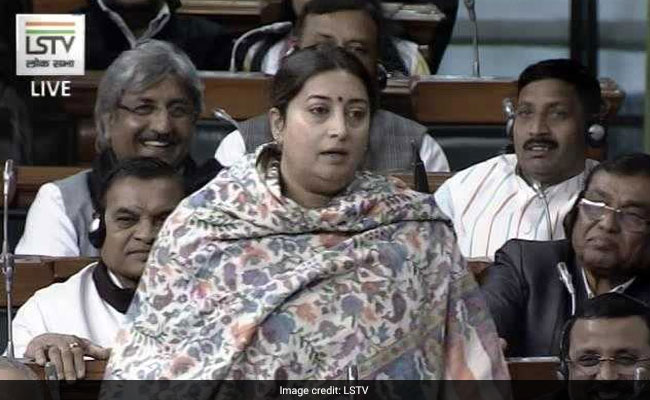 Smriti Irani criticised the Congress for not bringing the bill during its rule.

Addressing a parliamentary session held to decide on the Triple Talaq law, Union Minister Smriti Irani today wondered why there was so much opposition to curbing the controversial Islamic practice of instant divorce when the house has enacted similar legislations on dowry and sati in the past.

Maintaining that a law against Triple Talaq would empower women in the Muslim community, Ms Irani tore into the Congress for failing to bring the bill when it was in power at the centre. "It should be recalled that objections were also raised against curbing the dowry practice on the grounds that it was a social issue between two parties. Still, parliament brought a law against it," she said, adding that sati was banned in a similar manner too.

Quoting a verse from the Holy Quran, Ms Irani said even a khalifa -- or religious successor to the Prophet -- had spoken on the subject of Triple Talaq. However, she refused to elaborate on the matter despite requests from CPI(M) member Mohd Salim to do so.

The Union Minister went on to say that even if marriage is regarded as a contract in Islam, the husband should not be empowered to cancel it unilaterally. "And even if it is cancelled, there have to be repercussions," she declared.

Ms Irani also cited The Muslim Women (Protection of Rights on Divorce) Act-1986, passed by the Rajiv Gandhi government to strengthen a Supreme Court judgment on the matter, to justify passage of the bill.

The proposed law makes Triple Talaq -- a controversial practice that gives a Muslim man the right to instantly divorce his wife by uttering the word 'talaq' thrice -- an offence with a jail term of up to three years and entitles the woman to maintenance. The bill also addresses the subject of nikah halala, a controversial practice under which a divorced woman has to marry another man and consummate the marriage if she wants to remarry her husband.