Seven people were found dead while 17 others were rescued in an injured condition after the remote Honzar village in Dacchan tehsil was struck by the cloudburst in the early hours of Wednesday. 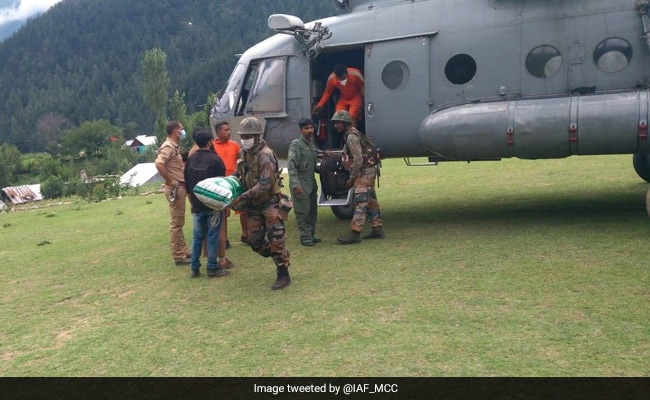 Despite the prevailing bad weather, the Indian Air Force (IAF) on Thursday made eight helicopter sorties with rescuers and relief material to cloudburst-hit Kishtwar district of Jammu and Kashmir where a rescue operation gained momentum to trace 20 missing people, officials said.

Seven people were found dead while 17 others were rescued in an injured condition after the remote Honzar village in Dacchan tehsil was struck by the cloudburst in the early hours of Wednesday, damaging 21 houses, 21 cow sheds, a ration depot, a bridge and a mosque.

He said the helicopters flew a total of eight sorties, transferring relief load of 2,250 kg, 44 NDRF and SDRF personnel, four medical assistants and transported two patients who are in critical condition from Sondar to Kishtwar for specialised treatment.

The IAF also made an attempt to airlift the joint team of NDRF and SDRF from the Jammu technical airport on Wednesday but bad weather forced the crew to return. Jammu Divisional Commissioner Raghav Langar and Additional Director General of Police, Jammu zone, Mukesh Singh were also on board the helicopter.

With the induction of the specialists from the NDRF and SDRF personnel along with sophisticated equipment, the rescue operation has intensified and efforts are on to locate the missing people, including nine women, the officials said, adding the chances of their survival seem bleak as they are believed to have been washed away by the strong current or buried under debris.

The officials said the success eluded the rescuers comprising police, Army, SDRF, NDRF and local volunteers from the village and adjoining areas throughout the day.

"Two of our teams reached the scene on Wednesday itself and were joined by another team this morning. Two more teams comprising both SDRF and NDRF personnel left Jammu and Srinagar by road for Kishtwar, while another two teams were airlifted by the IAF," he said.

The Jammu Divisional Commissioner and Additional DGP, Jammu zone, rushed to Kishtwar by road and supervised the rescue and relief operation along with Kishtwar District Development Commissioner Ashok Kumar Sharma.

The officials said the village, located on the banks of a stream and surrounded by mountains, can be reached by a three-hour trek from the last motorable road and is presenting a gloomy picture with wails of survivors filling the air.

"Shortly after the deafening sound of the cloudburst woke us up, we found ourselves caught in the flash floods," Mohammad Jabbar, a local resident said.

He said many of the structures along with the inhabitants were swept away by the gushing waters.

Fayaz Ahmad, another resident, hailed police for reaching the scene soon after getting information.

"A police party was the first to reach the village followed by Army and SDRF teams. We are thankful to them for a prompt response," he said, adding the Senior Superintendent of Police, Kishtwar, Shafqat Hussain Batt is camping in the village to personally lead the rescue operation.

A police spokesman said camps have been set up at Dangadooru and Soundar for receipt and despatch of the relief and rescue materials for the flood-affected people.

Special teams for this purpose have been formed and deputed from the District Police Lines Kishtwar, the official said.

The Jammu and Kashmir government had announced a compensation of Rs 5 lakh each for the next in families of those who lost their lives in the incident and Rs 50,000 each, and Rs 12,700 under the State Disaster Response Fund to the grievously injured.

At a function in Kathua district on Thursday, Lt Governor Manoj Sinha expressed his heartfelt condolences to the bereaved families which suffered loss in the Kishtwar cloudburst and assured every possible support to the families affected by the natural calamity.

"We cannot bring back the lives lost in the unfortunate incident. However, we will ensure the best possible assistance to the affected families. Our heartfelt sympathies are with the bereaved families," he said.

Most parts of Jammu region have been receiving incessant rains for the past few days and the Meteorological department has predicted widespread intermittent rain across Jammu and Kashmir till July 30.

"Heavy to very heavy rain is possible at some places and may lead to flash floods, mudslide, landslide and water logging (in low lying areas). People are advised to remain alert as water level has risen in all rivers (owing to incessant rains)," a MeT department spokesperson had said.

People have been advised to keep away from hilly areas and those prone to landslide and mudslide.