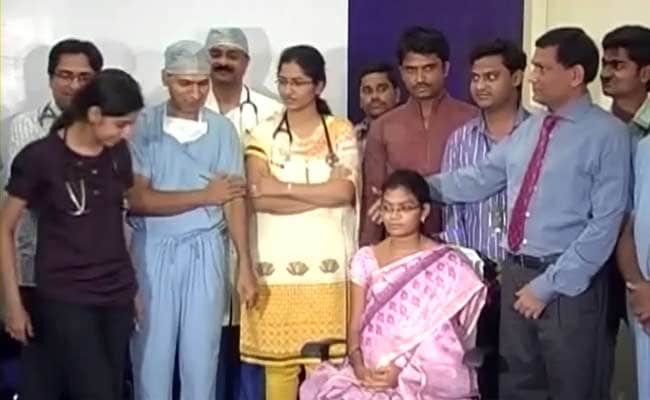 Hyderabad: For the first time in the country, doctors in Hyderabad have performed a heart surgery on a foetus to correct a serious condition that reportedly has no cure once the baby is born. Coming as it does on the eve of World Foetus Day on October 31, it has given India a great new reason to celebrate.

At Care Hospital in Hyderabad, 25-year-old Sirisha along with her husband, 29-year-old Arun, says she is happy, thrilled, grateful and relieved, all at the same time. Arun says when they were first told that the baby had heart issues, they panicked. They were directed to specialists at Care Hospital, where they were explained the procedure in detail and they decided to go ahead with the surgery.

Dr K Nageswara Rao, Paediatric cardiac surgeon, who performed the procedure, said "At 25-26 weeks, the left ventricle started deteriorating, getting damaged and shrinking. We realised this is going to be a serious condition where the left side of the heart will be too small and not useful and it won't be possible to perform surgery after birth. So we decided to go for this procedure called foetal aortal volvotomy."

This first-of-its-kind surgery was performed by 12 specialists. The first attempt at week 26 failed because the baby's position was wrong and they were unable to reach the foetus. One week later, it was decided that anaesthesia should be given to mother and also to baby, to avoid fetal movement during procedure. A specially imported needle was sent through the mother's abdomen into the uterus, baby's chest and finally into the left ventricle. A specially manufactured balloon and wire were used to dilate the blocked heart valve.

Sirisha says she managed to keep herself positive and confident only because the doctors explained everything. It also helped that Sirisha teaches science at a private school in Hyderabad, so she was able to understand what was being planned for her and her baby.

Just over two weeks later, the baby weight has grown from 830 g to 1200 g. With no blood leakage and heart pumping well, growth and heart activities have improved.

Promoted
Listen to the latest songs, only on JioSaavn.com
Dr Rao however warns that a 99 per cent block has been reduced to a 60 per cent block and the problem could recur in some cases, in which case they could repeat the procedure.

For now, Sirisha and Arun are happy that with their baby a new era in fetal medicine is beginning, and are looking forward to a healthy and normal baby coming into the world and into their arms very soon.