The affected areas - Durga Pituri and Shakrapara lanes - have been cordoned off as entire houses have crumbled to the ground, roofs have caved in and cement water tanks have been dislodged

A section of Kolkata's under-construction East West Metro service - a 16.6-km-long route that includes the country's first underwater train line - has met with what the chairman of the city's Metro Rail Corporation called an "unprecedented disaster". Although the underwater section, which runs for 520 metres under the Hooghly River in Kolkata has been completed, excavation work for underground tunnels in the Bowbazar neighbourhood hit an aquifer last week that resulted in flooding and cave-ins that forced the evacuation of more than 400 people from 52 homes in the area.

Anindita Dey, 25, is one of those who have been left homeless after flooding led to the collapse of houses in Bowbazar's Durga Pituri Lane. On Saturday she had been busy planning her wedding. On Sunday, she and her parents had to flee, leaving everything behind.

"December 1 is my wedding. I am not thinking about that. I am just thinking about my home and my things. I don't even have a dress to wear to office," she said, crying inconsolably at a police control room set up to deal with the crisis.

The affected areas - Durga Pituri and Shakrapara lanes - have been cordoned off as entire houses have crumbled to the ground, roofs have caved in and cement water tanks have been dislodged. The evacuated people have been put up in nearby hotels that have been paid for by Kolkata Metro, while tunnelling and soil experts from around the world have been flown in to solve a problem that threatens to derail the project. 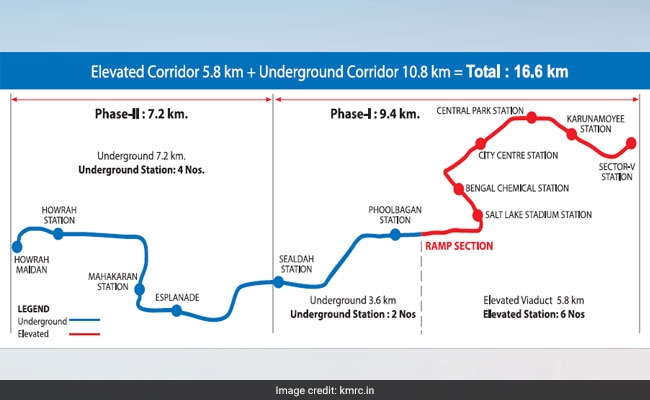 Chief Minister Mamata Banerjee, who visited the area on Sunday, was left shocked and Manas Sarkar, Managing Director of the Kolkata Metro Rail Corporation Limited, was left apologising for the disaster.

"It is a disaster. We never anticipated this. It is unprecedented. It has never happened in India and only in rare cases elsewhere in the world. I am sorry. We are trying to get things under control," Mr Sarkar said after a meeting with the government on Monday.

He would not offer details but said the project is likely to be delayed by at least a year and cost overruns will be considerable.

Tunnel boring has been stopped pending clearance from the Calcutta High Court.

"On Sunday they suddenly said leave. We could not take anything - no medicines, no prescriptions and no Aadhaar card. We have come to try and recover it," his wife, Manisha added.

The couple were among dozens of people being escorted by police to recover possessions. Each person was given only 10 minutes to rummage through the debris and find valuables and documents because of the extensive damage to their homes.

"It felt like an earthquake. House number 13 started collapsing. Its pillars broke one after the other till it was leaning forward. That was on Saturday. Now many others have also been affected," Sourav Datta, a local resident, said.

The 16.6-km-long East West Metro will run from Howrah to Salt Lake Sector V; 10.8 kilometres of this will be underground and 520 metres of that distance is underwater. The affected section is from Esplanade to Sealdah, which is about 2.45 km. The tunnel boring machine was about 600 metres from Sealdah when disaster struck.