Hundreds March With Candles Against CAA From Jamia To Shaheen Bagh

People have been protesting at Shaheen Bagh, which has become the epicentre of the anti-CAA agitation in the national capital, for over 30 days. 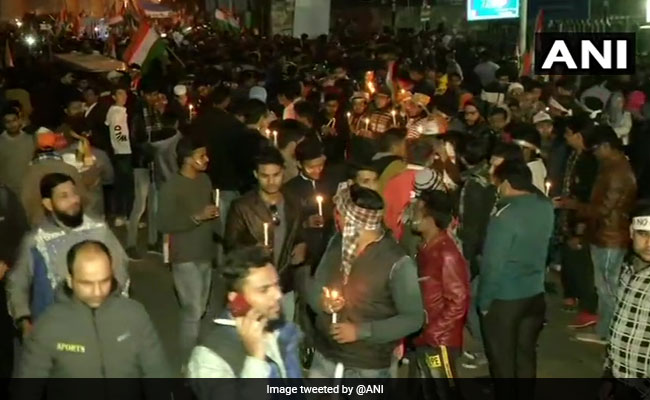 Hundreds, including women and children, on Sunday evening took out a massive anti-CAA march from the gates of Jamia Millia Islamia University to Shaheen Bagh as the chorus to demand repealing of the amended Citizenship Act grew louder in Delhi.

The march was high on symbolism with some locals dressed up as Mahatma Gandhi and Babasaheb Bhimrao Ambedkar. Three men assumed the identity of martyred revolutionaries Bhagat Singh, Rajguru and Sukhdev, one of them in prison clothes and tied in chains.

The protesters, chanting "Azadi" and "CAA-NCR Par Halla Bol", and other slogans also paraded a mock "detention camp" portrayed with a cell on wheels inside which sat little children of multiple faiths and chanted slogans.

People have been protesting at Shaheen Bagh, which has become the epicentre of the anti-CAA agitation in the national capital, for over 30 days.

Many of them held candles and others marched holding placards that said, "We reject CAA, NRC and NPR", "Hindu Muslim Sikh Isai, Aapas Mein Bhai Bhai".