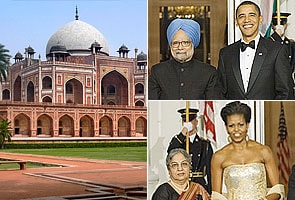 New Delhi: The nearly 450-year-old Humayun's tomb will be the first stop for President Barack Obama when he arrives here with his wife Michelle on November 7, followed by a private dinner with Prime Minister Manmohan Singh and his wife Gursharan Kaur.

"The President felt it was important give the rich civilization that India has, to pay tribute to that through this stop. We wanted to ensure that we had a culture stop in Delhi, in this instance visiting a tomb that has served as a precursor to the Taj Mahal," Deputy National Security Advisor Ben Rhodes said in Washington.

The tomb, which made its place in the UNESCO's list of World Heritage Sites in 1993, is one of the most frequented historic monuments by tourists in the national capital. The cultural stop, which will make up for the Obamas not making a trip to the Taj Mahal, will be followed by a private dinner with Singh and his wife.

"The President has had a very close personal relationship with Prime Minister Singh from his first meeting in London at the G20," Rhodes said, adding the two leaders have a close intellectual connection."...so he (Obama) is very much looking forward to this opportunity to have a private dinner with the Prime Minister," he said.

Next day, Obama have a back-to-back official engagements which will include bilateral talks with Singh followed by presser and address to joint session of Parliament.

In Mumbai, where Obamas are landing on November 6, the US President will have series of business meetings. Next day he will visit a local Mumbai school and will celebrate Diwali with school children before attending a town hall and round table on agriculture and food security in an university there.