Incidents of violence have been reported from northeast Delhi's Maujpur, Bhajanpura and Chand Bagh area.

Maujpur in northeast Delhi witnessed large scale violence on Monday when anti and pro-citizenship law protesters got into a scuffle that escalated into stone throwing and vehicles being set on fire. Within a few hours, reports of violence emerged from the nearby areas of Bhajanpura and Chand Bagh too.

This was the second case of violence in northeast Delhi in the last 24 hours.

Hundreds of women had been carrying out a protest against the Citizenship Amendment Act or CAA at the Jaffrabad Metro Station since Saturday night. On Sunday afternoon, BJP leader Kapil Mishra posted a tweet inviting those supporting the CAA to Maujpur Chowk at 3 pm as an answer to the blockade at Jaffrabad. By 4:30 pm, there was a scuffle between pro and anti-CAA protesters that resulted in stone throwing. Police had to fire teargas shells to bring the situation under control.

In the evening, Mr Mishra also tweeted a video where he is seen next to Deputy Commissioner of Police Northeast Ved Prakash while he issues the threat that his supporters are only waiting till US President Donald Trump's visit and after that they will not listen to even the Delhi Police and will ensure that all roads blocked by anti-CAA protesters are cleared. 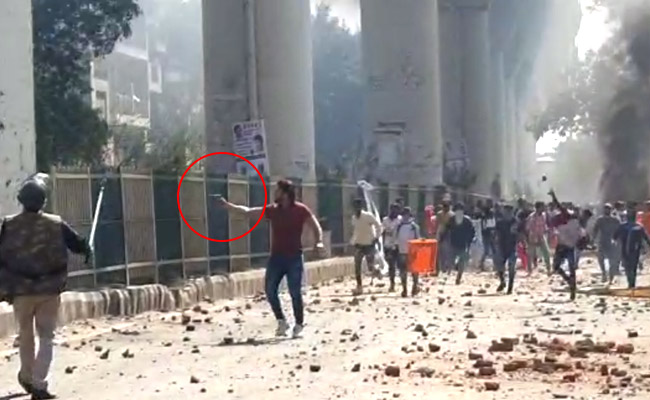 A still from violence in Delhi's Maujpur, where a man is seen holding a gun in his hand.

On Sunday night, videos emerged where bricks were being unloaded from a truck while people in the vicinity raised slogans of Jai Shri Ram.

Protests at both Jaffrabad and Maujpur continued on Monday. At the Maujpur Chowk, pro-CAA protesters were seen playing songs on loudspeakers in the morning with lyrics such as "Jo maange azaadi desh mein, bhejo Pakistan unhe (Those asking for freedom should be sent to Pakistan)" and "Bharat ka abhimaan hai Hindu bhagwadhaari aayega, Pukaarti Ma Bhaarti khoon se rang bharo goliyon ke naam ki (Hindus are the pride of India. The saffron bearers will come. Mother India has given a call that through bullets fill the colours with blood)."

The police deployment was all around the Maujpur-Jaffrabad stretch but the cops near the chowk who heard the inciteful songs allegedly did not make any attempt to stop them.

Around 12 pm, two smaller groups of anti-CAA protesters and pro-CAA protesters threw stones at each other outside the Maujpur Metro Station which was closed to public. The police fired teargas shells and brought the situation under control.

However, just two hours later, around 2 pm, the pro-CAA crowd headed towards Jaffrabad Metro Station and the anti-CAA protesters from Jaffrabad headed towards Maujpur Chowk, a distance of one kilometre. Some policemen started heading towards the midpoint as they suspected the situation could turn violent, but by the time enough forces could reach, heavy stone throwing began from both groups. The police resorted to using teargas shells when the clash escalated into a stampede-like situation. An autorickshaw was set on fire, however, it is unclear which group was involved in the arson.

Videos have also emerged where a man in a red shirt can be seen coming from the Jaffrabad direction towards Maujpur, confronting an unarmed Delhi Police official. He then turns slightly away from the policeman and fires into the air. The gunman has been detained by the police.

Till about 5 pm, the incidents of stone throwing continued, after which the police finally managed to get things under control. There are still at least 800 to 900 police and paramilitary personnel that have been deployed on the Jaffrabad-Maujpur stretch in the aftermath of the violence.