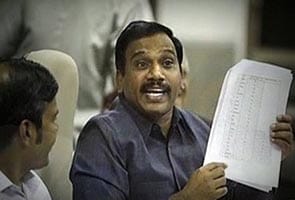 New Delhi: In the 2G spectrum allocation case, as he argues his innocence in court, A Raja has developed somewhat of a penchant for pointing fingers at the Prime Minister and P Chidambaram.  Mr Raja, who has been accused of designing and delivering India's biggest scam when he was Telecom Minister, says Dr Manmohan Singh and Mr Chidambaram, who was Finance Minister in 2008, were in the know of decisions that have landed him in jail.

But documents accessed by NDTV show that Mr Raja misused a letter sent to him by the Prime Minister to make it appear as if Dr Singh agreed with his decisions. On December 26, 2007, Mr Raja wrote to the PM, stating that he had met with Pranab Mukherjee to discuss the policy to issue mobile network licences.  Mr Mukherjee, who is now Finance Minister, was at the time the head of a Group of Ministers in charge of supervising spectrum-related decisions.  In this note, Mr Raja refers to an annexure that he says explains "the issue-wise details and my decisions."

On January 3, 2008, the PM wrote back to Mr Raja acknowledging receipt of his letter.  To others, on 7 January, 2008, Mr Raja misrepresented the PM's acknowledgement -asking the Department of Telecom to treat his letter and communication to the PM as "policy directive for licensing matters."  The policy was revised barely three days before the issue of 122 licences - and that without taking the mandatory nod from the Telecom Commission.

The one man committee headed by Justice Shivraj Patil (Retired), that went into the Telecom ministry's functioning, says " the policy was modified without due clearances on the 7th of January 2008."

On January 10, 2008, companies were given just a few hours to provide their Letters of Intent and cheques. Those allegedly tipped off by Mr Raja were waiting with their cheques and other documents.  Some of their executives are now in jail along with the former Telecom Minister.