"Tell Your Boss...": How Kiren Rijiju's Daughter Took Him To Her School

Kiren Rijiju shared a video of the behind-the-scenes efforts it took for his daughter to convince her father to visit her school. 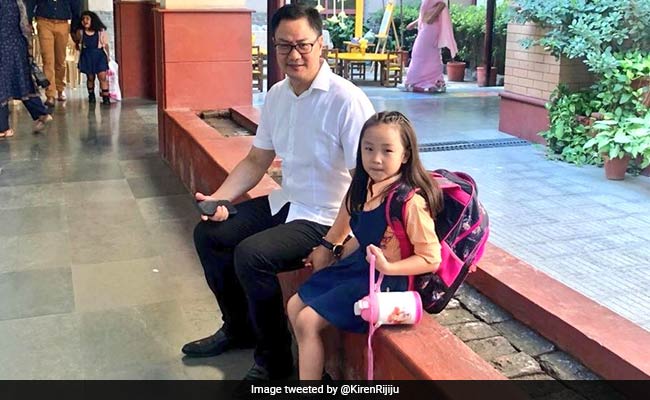 Union Minister Kiren Rijiju's daughter was perhaps one of the happiest students at her school recently. He accompanied his daughter to her school in Delhi for 'Grandparents' Day' celebrations and shared a photo on Twitter.

"Finally, for the first time I could manage a little moment to attend my daughter's "Grandparents Day" in her school in the absence of any of her grandparents. She was too excited!" 47-year-old Kiren Rijiju tweeted on Sunday.

Mr Rijiju is seen sitting on a ledge in the school corridor with his beaming daughter.

The Minister of State for Home Affairs also shared a video of the behind-the-scenes efforts it took for the child to convince her father to visit her school.

"Papa, tomorrow is my Grandparents' Day. You must come tomorrow. Mama always comes to my school, sees the performance. She sees my dancing...(sic)," Mr Rijiju's daughter tells him, sitting on her bed.

"But you never ever come to my school. How can that be, Papa? My grandparents come to Delhi from far village (sic)," she goes on.

This is how my little daughter convinced me to attend her school's "Grandparents Day" for the first time. pic.twitter.com/ZaIt3y658D

The doting father finally relents. "Alright, I'll try to come. I'm so busy these days. What to do?" he can be heard saying in the 51-second clip.

His daughter's reply to this is classic. "You have office but just say to your boss that I have to come to my daughter's school. Then your boss can forgive you," she says.

The video was re-tweeted over 500 times and many people commented. "What a cutie patootie," singer Adnan Sami wrote.

Kiren Rijiju is a father of two boys and three girls.

The photo of the father-daughter duo in school was re-tweeted by over 2,000 people.