History Has Been Created: PM Modi At "Namaste Trump'' Event

The ''Namaste Trump'' event is based on the lines of ''Howdy Modi'' programme that was addressed by Narendra Modi and Trump during the Prime Minister's trip to Houston last September. 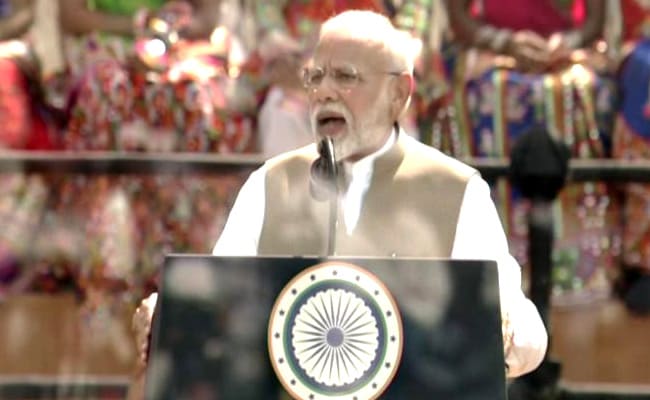 The Prime Minister said that the meaning of the name of this event -- ''Namaste'' is very deep.

History has been created today, Prime Minister Narendra Modi said at Motera Stadium in Ahmedabad on Monday, while welcoming his ''friend'' US President Donald Trump and his wife Melania to India.

"You are heartily welcome in the largest democracy of the world. This is Gujarat but the entire country is enthusiastic in welcoming you," he added.

The Prime Minister said that the meaning of the name of this event -- ''Namaste''  is very deep.

"This is a word from the oldest languages of the world - Sanskrit. It means that we pay respect to not only to the person but also to the divinity inside him," Modi said.

The bonhomie between the two world leaders was displayed once again when PM Modi hugged Trump at the stadium.

The ''Namaste Trump''event is based on the lines of ''Howdy Modi'' programme that was addressed by Narendra Modi and Trump during the Prime Minister's trip to Houston last September.

The US President arrived a short while ago in Ahmedabad with his wife Melania and a ministerial delegation that also included his daughter Ivanka and son-in-law Jared Kushner who serve as senior advisors to Trump.

Prior to this, Trump and Melania also paid a short stopover at Sabarmati Ashram and spun a Charkha, which is closely associated with India's freedom struggle and Mahatma Gandhi.

The dignitaries also had a look at the three monkeys of Mahatma Gandhi depicting moral gestures -- see no evil, speak no evil, and hear no evil -- at the ashram.

Trump, who arrived a short while ago, was welcomed by Prime Minister Narendra Modi at the Ahmedabad Airport with a hug.

In the evening, the US President will depart for Agra to catch a glimpse of the Taj Mahal, one of the seven wonders of the world, before sunset with his family.