Hired by Twitter, IITian from Madhya Pradesh heads to California 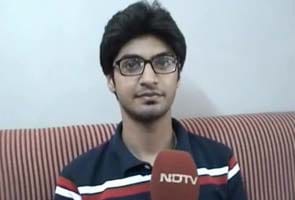 Vidisha (Madhya Pradesh): It's a dream come true for 22-year-old Swapnil Jain, a computer science graduate from IIT-Delhi. Swapnil, who hails from Vidisha in Madhya Pradesh, has been offered a job by micro-blogging website Twitter - at a whopping package of Rs 80 lakh per annum.

He is moving to California in October to start his new job.

"Twitter has offered me a software engineer's job during the placement in IIT-Delhi. It was my dream to work for companies like Twitter or Facebook. I have worked very hard and my efforts have paid off," he said.

Swapnil says this is the first time in the last two years that Twitter has hired someone from India. And he is thrilled.

"I want to represent my country and hope that I'm able to make my family and city proud," he said.

Swapnil credits his success to his family, especially his parents. His grandfather, Babu Lal Jain, is a well-known lawyer in Vidisha and his father has a jewellery showroom.

Promoted
Listen to the latest songs, only on JioSaavn.com
"I am very happy. He made this possible through his hard work and dedication," said Swapnil's father Sanjay Jain.