Hijab Row: Before Karnataka schools reopened today, police on Sunday undertook a route march in Shivamogga as a precautionary measure amid the ongoing hijab controversy in the state. 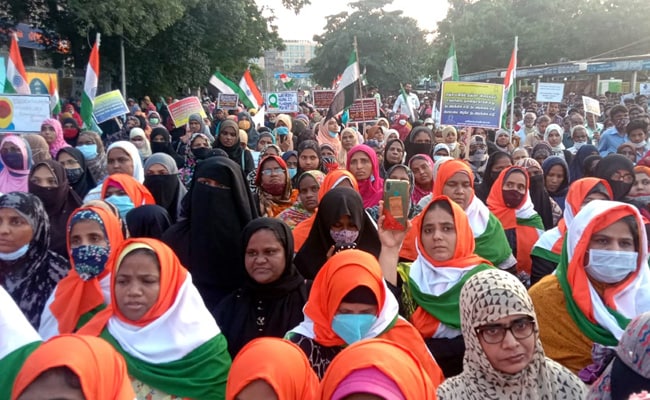 The Karnataka High Court appealed to the media "to be more responsible." (File)

Amid the ongoing Hijab controversy, the Karnataka High Court on Monday resumed hearing the petition challenging the ban on Hijab in colleges.

The Karnataka High Court appealed to the media "to be more responsible."

Senior advocate Devadatt Kamat, appearing for the petitioner, submitted before Karnataka High Court that the Government Order (ban on hijab) is a non-application of mind.

The petitioners have urged the court to allow girls to attend classes in hijab and continue their education while the government argued that it would be necessary to find whether hijab is essential in Islam.

Meanwhile, high schools for up to Class 10 reopened in Karnataka on Monday while colleges are on holiday till February 16.

Here are the highlights on Hijab Row:

Get NDTV UpdatesTurn on notifications to receive alerts as this story develops.
Feb 14, 2022 16:43 (IST)
"What Stops State From Letting Me Exercise Religious Freedom": Petitioner
"Today, what is it that stops the state from permitting me to exercise religious freedom. They say public order," says lawyer representing students.
Feb 14, 2022 16:02 (IST)
How The Controversy Began
Controversy over Muslim students barred from wearing the hijab began in December after six girls from Karnataka's Udupi district voiced their concerns. They then approached the High Court. Since then it has snowballed into a significant matter, with the Supreme Court also approached. However, Chief Justice of India NV Ramana said: "We will interfere only at an appropriate time."
Feb 14, 2022 15:58 (IST)
Where Is The Law That Bans Headscarves, Asks Students' Lawyer
"The question is where is that law on the basis of which the headscarf is prohibited," asks the lawyer respresenting students.
Feb 14, 2022 15:56 (IST)
College Panel Has No Legal Right To Decide On Hijab Question, Says Lawyer
"A College Development Committee does not have any statutory basis. It is not passed under any statute, but some executive order and it does not pass the muster to regulate public order," says the lawyer respresenting students, opposing the college panel's right to decide on the hijab question.

Hijab row | Senior Advocate Kamat apprises Karnataka HC that the GO (government order) says wearing of headscarves is not protected by Art 25 and the Government Order says it to leave it to College Development Committee to decide whether it shall be a part of the uniform or not.

Petitioners' Advocate Kamat : Public order is not a mere law and order disturbance. When there is a heightened sense of law and order, it will be public order.

Hijab row | Senior adv Devadatt Kamat, appearing for the petitioner, submits before Karnataka HC that the Government Order (ban on hijab) is a non-application of mind. He says this GO (government order) is in the teeth of Article 25 and it is not legally sustainable.

Hijab row | Karnataka High Court appeals to media, says
our earnest request to media is to be more responsible

Visuals shared by news agency ANI show a woman (presumably a teacher) stopping students wearing hijabs at the school gates and ordering one student to "remove that, remove that".

The video also shows some parents arguing as their children are stopped from entering the school.

Feb 14, 2022 12:12 (IST)
Hijab Row: No Public Gatherings In Mangaluru As Karnataka Schools Reopen
Prohibitory orders under Section 144 of CrPC has been clamped around 200-metre radius of all the high schools within the city police commissionerate limits from Monday till February 19.

The move is part of a precautionary measure in view of the hijab controversy. The high schools are reopening on Monday after the holiday declared by the state government.

BJP Worker, Cop Among 13 Sent To Jail For Pushing Teen Into Prostitution