Angkor Wat in Cambodia is one of the largest religious monuments in the world which was originally a Hindu temple dedicated to the Lord Vishnu but gradually transformed into a Buddhist temple. 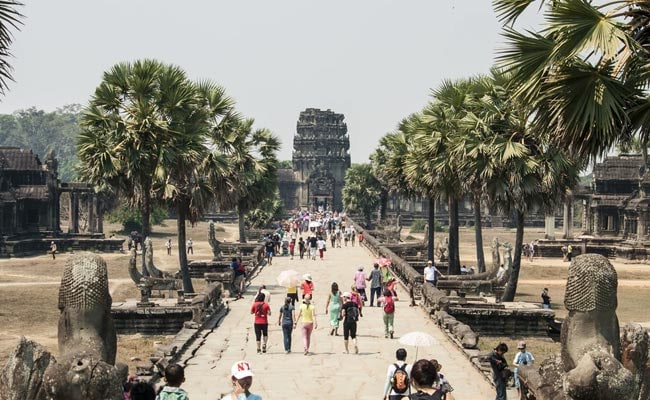 Samajwadi Party chief Akhilesh Yadav today announced that a grand city named after Lord Vishnu would be developed, which would have a spectacular temple inspired by Cambodia's sprawling Angkor Wat, in the state if his party comes to power.

Significantly, Mr Yadav's comments come after BJP leader and UP Deputy Chief Minister Keshav Prasad Maurya last week raked the Ram temple issue and suggested there could be a legislative route for the construction of a temple in Ayodhya.

"We will develop a city in the name of Lord Vishnu over 2,000 acres of land near Lion Safari (Etawah). We have a lot of land in Chambal ravines and the city will have a grand Vishnu temple, that will be a copy of famous Angkor Wat temple," Mr Yadav, a former UP chief minister, told PTI.

"At present, in Parliament, we do not have the adequate strength. Even if we bring the matter in Lok Sabha, our strength in the Rajya Sabha is less, and it will definitely be defeated. Every devotee of Lord Ram knows this. The court will soon give its judgement," Mr Maurya had said.

Mr Yadav, however, promised that if voted to power, he will develop a city in the name of Lord Vishnu, whose incarnations Lord Ram and Lord Krishna were. A team of experts will be sent to Cambodia to plan the city, which will be a centre for culture and knowledge of our ancient times, the SP chief said.

Angkor Wat in Cambodia is one of the largest religious monuments in the world which was originally a Hindu temple dedicated to the Lord Vishnu but gradually transformed into a Buddhist temple.

Speaking here, Mr Yadav attacked the BJP claiming it was a party which did nothing on the ground.

"BJP believes in conspiracies. We believe in development. They befool people to get their vote. We bank on our development work for votes. The people of the state are fed up with BJP and are looking for a chance to ensure it gets out of the power. In 2019, BJP will get defeated due to its anti-people politics," he claimed.

"We have decided the plans for the yatra. There are some changes in the dates that will be finalised in a day or two," he said.