Whiteout In Himachal Pradesh And Uttarakhand, Surge Of Tourists In Shimla

Himachal Pradesh and Uttarakhand are likely to get more rain and snow till Wednesday, said weather officials 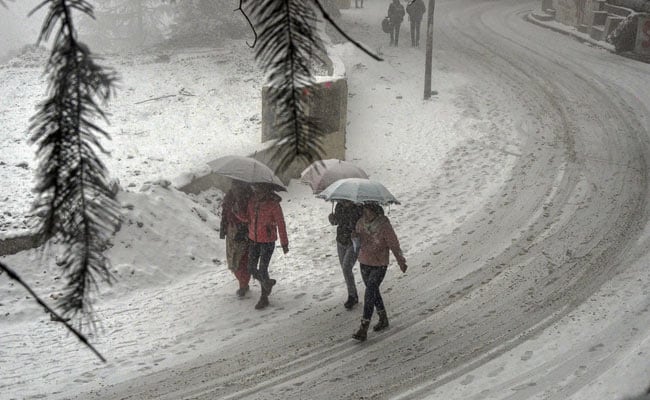 Icy weather gripped Himachal Pradesh, Uttarakhand and Jammu and Kashmir as the hill states received heavy snowfall over the weekend. Shimla, Manali, Narkanda, Dharamshala, Mcleodganj and Kalpa in Himachal Pradesh received heavy rain and snowfall on Sunday. It was a complete whiteout at Kedarnath in Uttarakhand, while Srinagar in Jammu and Kashmir recorded minus 1.2 degree Celsius and Gulmarg minus 9 degrees.

The two popular hill resorts of Shimla and Manali saw a surge of tourists for the second day, local news reports quoted hoteliers.

There are chances of more rain and snow in Himachal Pradesh till Wednesday, said weather officials. "Shimla and its nearby areas have been experiencing heavy snowfall and this was the season's highest in Shimla town," said an official of the meteorological department.

Icy winds brought down the minimum temperature to 1.7 degrees Celsius and the maximum stayed at 3.7 degrees in the state capital.

Kalpa, around 250 kilometre from Shimla received 13 cm of snow, the highest in Himachal Pradesh and recorded a minimum temperature of minus 3.8 degree Celsius, said weather officials, while the lower slopes of Palampur, Solan, Nahan, Bilaspur, and Mandi received intermittent rainfall.

In Jammu and Kashmir, the minimum temperatures did not drop significantly today but people in Srinagar and other towns largely stayed indoors due to slippery roads. In Srinagar there was hardly any traffic on the roads today as people waited for the thaw to set in.

(With inputs from ANI, PTI & IANS)