Have Nitish Kumar's Back If He Loses Allies: Bihar BJP Says It Outright

Nitish Kumar's support of the centre on issues like demonetisation have fanned speculation of his growing proximity to former ally BJP. 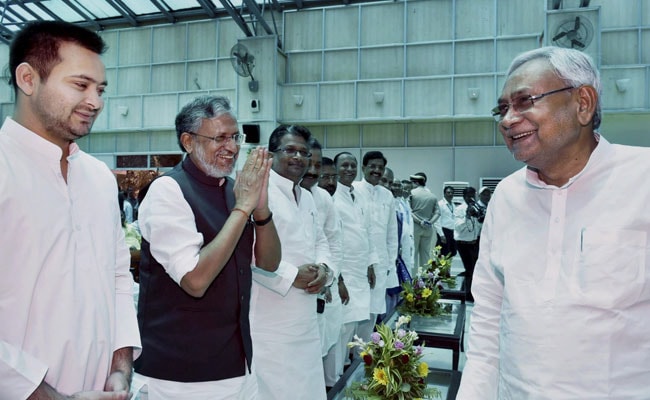 Nitish Kumar (right) has been offered support by the BJP in Bihar.

As Lalu Yadav and Nitish Kumar, the two main partners in Bihar, try to bridge a widening gap, rival BJP has made it clear that it's willing to do its bit. "If Nitish Kumar pulls out of the alliance, we will not be a part of the government, but we can offer outside support," said local BJP leader Nityanand Rai, adding that "it all depends on the central leadership".

It's unlikely that Bihar's politics will get a new couple alert right away - but the potential is certainly increasing.

This morning, Lalu Yadav, who was raided on Friday, met with his lawmakers, who form the biggest group in the Bihar legislature. His 27-year-old son, Tejashwi Yadav, who is the Deputy Chief Minister of the state, has been accused of corruption by the CBI along with him. The party decided that he will not quit office.

Thus far, Chief Minister Nitish Kumar, who was away from Patna when Lalu Yadav's home and other properties were raided, has not commented publicly on the allegations of venality against the Yadavs. "Nitish spoke to Lalu yesterday. He was ill earlier," said Jagdanand Singh, a senior leader from Lalu Yadav's party.

Tomorrow, the Chief Minister will make his first remarks on the corruption scandal at a gathering of his party. Without naming Lalu or Tejashwi Yadav, he is expected to say that "the comforts of power cannot determine principles", said sources. The reprimand will be clear, but it will be couched in criticism of those seeking to turn the allies against each other, they said.

By scheduling his party session for tomorrow, Nitish Kumar has arranged cover to skip a meeting of 17 opposition parties in Delhi that will be chaired by Congress leader Sonia Gandhi, whose party is the third and most junior member of the Bihar government. The anti-BJP front was proposed enthusiastically by Nitish Kumar in April. He broke with it last month to announce that he would support the BJP's choice for President of India instead of the opposition's candidate. He indicated that he was left with little choice because the opposition had yet to decide who it would field.

Tomorrow's meeting was intended at avoiding a repeat of that debacle. The opposition hopes to shortlist its candidate for Vice President, who will be elected next month. Nitish Kumar has arranged for Sharad Yadav to represent their party at the meeting. "This opposition front cannot be halted," Sharad Yadav said in an attempt to assert that the differences over the Presidential election were a one-time deal.

However, Nitish Kumar has displayed a propensity lately for cross-voting to side with Prime Minister Narendra Modi including over his decision to ban high-denomination notes in November. The Bihar Chief Minister was the sole opposition heavyweight to agree with the PM's assessment of the move as necessary to fight corruption. The dots, worry Nitish Kumar's allies in private, are not hard to connect. Ahead of the 2019 general election, they worry that the controversy around Lal Yadav's son will give Nitish Kumar the perfect excuse to rearrange his partnership - even if he loses the Congress and Lalu Yadav's lawmakers, between the BJP and him, they have enough votes to ensure he wins a trust vote.