The state government and police force have come under heavy criticism over the Hathras case.

The CBI took over the Hathras case last week on Saturday.

The CBI today began probe into the alleged gang rape and torture of a 20-year-old Dalit woman, who died at a hospital in Delhi last month two weeks after the savage assault that triggered massive outrage across the country. A team of CBI officials visited the victim's village this afternoon, about a month after she was allegedly gang raped by four men of so-called upper caste.

The team visited the millet field in the UP village where, according to the victim's brother, the accused tried to strangle the 20-year-old woman. The victim's mother, who was unwell, was also taken to the crime scene by the CBI officials when she was returning home in an ambulance after a brief hospital visit.

The CBI officials were also accompanied by a forensic expert, police personnel and the victim's brother. The team left the crime scene after over two hours. Later, the team visited the site where the victim was cremated.

The woman's brother later told reporters that he accompanied the CBI team for three hours while they collected samples and got him to sign on them. But the investigators did not interrogate him, he added.

"We can't say anything about the CBI probe which has just begun.  We were asked to recall the sequence of events. We are satisfied with the security arrangements," another of her brothers told NDTV. 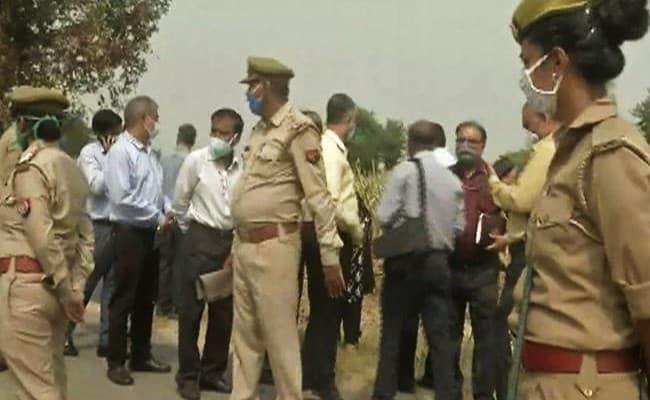 Hathras Case: The CBI officials were also accompanied by a forensic expert, police personnel and the victim's brother.

A special investigation team (SIT) was formed on September 30 by Chief Minister Yogi Adityanath, which was supposed to file its report in seven days. Later, it got an extension of 10 days.

The case, however, has been taken over by the CBI that filed a First Information Report (FIR) on Sunday.

The CBI registered the FIR in the Hathras case under sections 376-D (gang rape), 307 (attempt to murder) and 302 (murder) of the IPC and Section 3 of the SC/ST Act (offences of atrocities).

The state government and the UP Police have come under heavy criticism over the Hathras case.

A large part of that criticism has been about the government's handling of the case, including its treatment of the young woman's traumatised family - whom they allegedly locked up in their home while they hastily cremated their daughter at night.