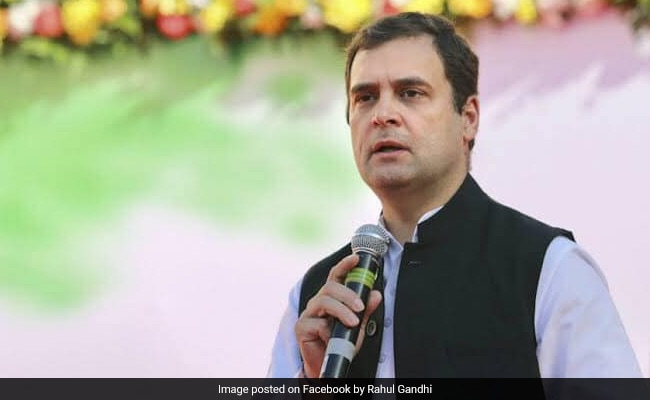 Rahul Gandhi's broadside against Haryana Chief Minister Manohar Lal Khattar over the BJP leader's "joke" on Kashmiri women, which was seen as sexist, has flared into a Twitter fight between the two.

Mr Khattar while addressing a rally in Haryana on Friday highlighted the state's skewed sex ratio, and made a reference to what a BJP leader said in 2014 about bringing "daughters-in-law from Bihar" - and now the scrapping of special status from Jammu and Kashmir, after which Kashmiri women who marry people from other states will no longer have dual citizenship.

"Our minister Dhankhar ji used to say that we will have to bring daughters-in-law from Bihar if the number of girls reduces and the number of boys increases. Now people say that since Kashmir is open, we can bring girls from there. Jokes apart, if there is a good (sex) ratio, the balance in the society will be set right," Mr Khattar said at the rally, according to news agency ANI.

In a bizarre promise to young men of Haryana in 2014, BJP leader OP Dhankar had said he would bring brides from Bihar for them if they were unable to find a match in the state infamous for its skewed sex ratio.

Mr Gandhi condemned the comments by Mr Khattar. "Haryana CM, Khattar's comment on Kashmiri women is despicable and shows what years of RSS training does to the mind of a weak, insecure and pathetic man. Women are not assets to be owned by men," he tweeted.

Mr Khattar hit back in a tweet that also had his speech attached along with subtitles in Hindi. "Dear Rahul Gandhi ji, at least at your level, you shouldn't react on distorted news. I'm attaching the video of what I actually said, and In what context - this will give you clarity of mind," the Haryana Chief Minister said.

Dear @RahulGandhi ji, at least at your level, you shouldn't react on distorted news. I'm attaching the video of what I actually said, and In what context - this will give you clarity of mind. https://t.co/TCjhV0cuiOpic.twitter.com/GfD3SWlETI

Congress leader Sushmita Dev has demanded ML Khattar's resignations. "Khattar should step down. The statement depicts that he is mentally sick. It is complete debauchery. A chief minister has made derogatory statements about the women of Kashmir," she was quoted as saying by news agency PTI.

West Bengal Chief Minister Mamata Banerjee made a wider condemnation of "insensitive comments" over the centre's move to divide Jammu and Kashmir into two union territories. "We, and more so people holding high public office, must restrain ourselves from making insensitive comments about the beloved people of Jammu and Kashmir. These are hurtful, not only for J&K, but the entire nation," Ms Banerjee tweeted.

Mr Khattar has been in the news for controversial remarks seen as misogynistic in the past too. In November 2018, he said women file false rape cases to get back at estranged male friends. "Around 80-90 per cent of the rape and molestation cases happen between people who are familiar with each other. They roam around together for days, and when they finally squabble one day, the woman files an FIR saying that she has been raped," he had said at a rally in Haryana.