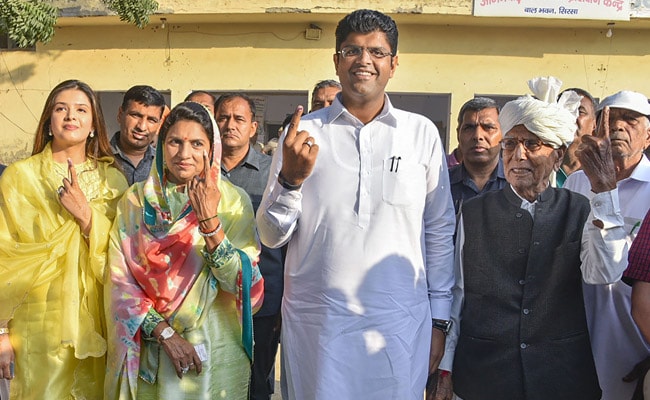 Congress has reached out to Dushyant Chautala, whose Jannayak Janata Party (JJP)

As the ruling BJP appeared set for a far smaller tally than it had expected in the counting of votes in Haryana, the Congress, galvanised by its unexpected surge, reached out to Dushyant Chautala, the man many say will be kingmaker if it goes down to the wire.

The BJP was ahead in 43 of 90 Haryana's seats while the Congress hovered around 28 seats, putting up a strong fight.

The Congress, accused of running a listless campaign amid massive infighting, has reportedly started talks with possible allies.

The Congress has reached out to Dushyant Chautala, whose Jannayak Janata Party (JJP) is less than a year old but is predicted to win enough seats to count. Party president Sonia Gandhi has also reportedly spoken to former Chief Minister Bhupinder Singh Hooda.

"The way these trends are showing, it is clear people voted for change," Mr Chautala told NDTV, adding, "The keys to the next government will be in the hands of the JJP."

On reports of the Congress offering him the chief minister's post, he said: "I have not had any discussions with any one. Decision will be taken only after the final numbers are out."

Sources in the Congress, however, say the party leadership is not in favour of offering chief ministership to the JJP leader as it has been singed in Karnataka, where its government with Janata Dal Secular crashed.

The BJP seems unlikely to make it to its "Mission 75" target in Haryana, a state where it came to power on its own for the first time in 2014.

Underscoring the ruling party's bleak outlook, several of its ministers were trailing.

"These are just leads... The results will take time. The picture will be clearer later," said Naveen Kumar, BJP spokesperson.