Yogeshwar Dutt, who won a bronze medal at the London Olympics in 2012, joined the BJP a month before the October Assembly election in the state 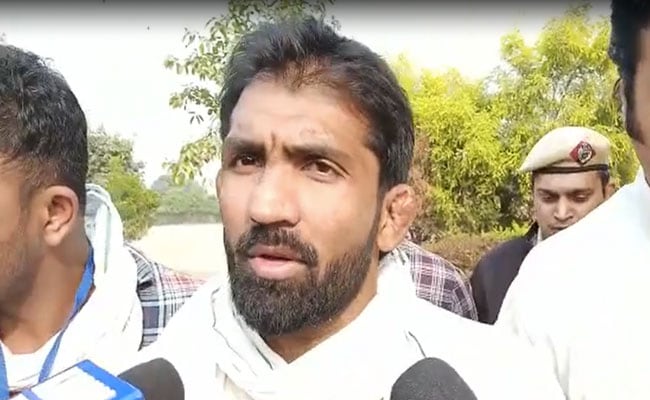 The BJP's Yogeshwar Dutt has lost the bypoll to the Baroda Assembly seat in Haryana's Sonipat district. Mr Dutt, an Olympic wrestler who joined the party in September last year, was beaten by the Congress's Indu Raj Narwal; the Election Commission has yet to reveal the victory margin.

"I must be lacking something due to which I could not meet people's expectations. I don't know the exact reason but this is people's mandate. I worked hard, I will work hard. I have congratulated the winning candidate," Mr Dutt told reporters after his loss.

This is the second consecutive time Yogeshwar Dutt has failed to win this seat; he was fielded by the party in last year's full election but lost to the Congress's three-time winner Krishan Hooda.

The bypoll - seen as a direct contest between the ruling BJP and the Congress - was necessitated after Mr Hooda died after a prolonged illness in April. The BJP has never previously won this seat.

"Baroda was already with the Congress. We could not turn the opportunity into a challenge. (We accept) the mandate (of the people) but Yogeshwar Dutt's defeat is like the slaughter of Abhimanyu," he posted.

The bypoll was also a matter of prestige for former Chief Minister Bhupinder Singh Hooda, as this Jat-dominated constituency lies adjacent to his own Garhi-Sampla Kiloi seat and is seen as his stronghold.

Baroda was a reserved seat till 2005 and a pocket borough of the Indian National Lok Dal (INLD) before the Congress won it for three consecutive terms starting 2009.

Although the BJP failed to win this seat in 2019, it did win a total of 40 of 90 assembly seats in October last year and later formed the government with support from Dushyant Chautala and the Jannayak Janata Party (JJP), which won 10 seats.

Yogeshwar Dutt, who won bronze at the London Olympics in 2012, joined the BJP a month before the October election. Mr Dutt said Prime Minister Narendra Modi was his "source of inspiration".

"The work you (the Prime Minister) have done has given a new direction to politics. By joining the BJP, I have got an opportunity to serve the country," he tweeted at the time.

He had been linked to the BJP even earlier - in March 2019 before the Lok Sabha polls. According to news agency PTI, his name was recommended by the party's state unit.