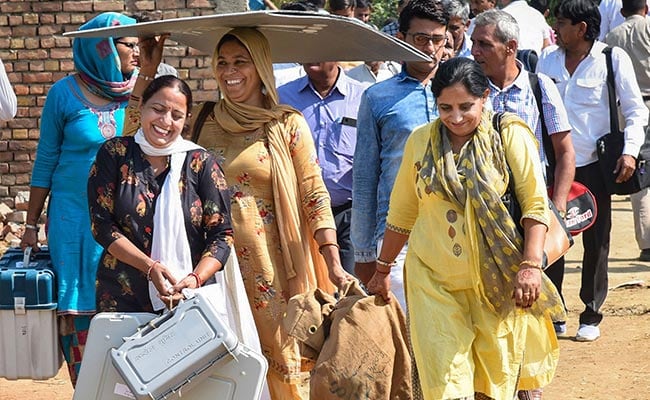 Haryana elections 2019: Votes will be counted on October 24.

Haryana will vote on Monday to elect members of its legislative assembly with the BJP seeking to retain power in the state on the back of the recent victory in Lok Sabha polls while the opposition hopes to take advantage of any anti-incumbency.

The ruling BJP is locked in a contest with the opposition Congress and the fledgling Jannayak Janata Party or JJP for the 90 assembly seats in Haryana which has over 1.83 crore voters, including 85 lakh women and 252 transgenders, while 19,578 polling stations have been set up.

Polling will be held from 7 am to 6 pm. Tight security arrangements have been made with the deployment of over 75,000 security personnel in Haryana. Votes will be counted on October 24.

The high-voltage campaigning by the BJP saw participation of a galaxy of leaders led by Prime Minister Narendra Modi and his cabinet colleagues Amit Shah and Rajnath Singh, as it continued to aggressively raise the subject of nationalism by focusing on scrapping Jammu and Kashmir's special status and targeted the opposition on national security and corruption.

The opposition tried to corner the BJP governments at the centre and in the state on the handling of the economy with Congress leader Rahul Gandhi blaming the ruling party for the economic slowdown and unemployment and highlighting issues like "failure" of demonetisation and GST rollout.

The Congress is hoping to make a comeback in Haryana following a change in guard in the state, while the BJP led by Chief Minister Manohar Lal Khattar has set a target of winning 75 seats out of 90 in which 1,169 candidates of various political outfits are contesting.

Currently, the BJP has 48 members in state assembly and had won all 10 Lok Sabha seats in the recent election.

The Dushyant Chautala-led Jannayak Janta Party (JJP), a breakaway faction of the Indian National Lok Dal (INLD), is also hoping for an improvement in its prospects following the Lok Sabha debacle. The party had emerged on the scene following a feud in the Chautala clan in December last year.

The BSP, AAP, INLD-SAD combine, Swaraj India and the Loktantra Suraksha Party (LSP) have also entered the ring, though none of them is fighting on all 90 seats.

In the 2014 assembly polls, the BJP for the first time came to power in Haryana winning 47 seats. It won the Jind bypolls earlier this year, taking its total strength in the state assembly to 48. The INLD had 19 MLAs while the Congress has 17 legislators. The BSP and the SAD had bagged one seat each in the last polls while five were Independents.

Here are the top candidates contesting the Haryana elections assembly 2019: