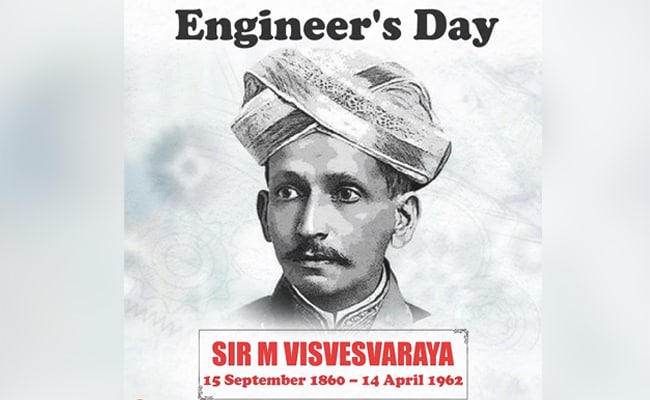 Happy Engineer's Day 2020: The birth anniversary of Mokshagundam Visvesvaraya, one of India's greatest engineers is celebrated every year as Engineer's Day. Popularly called 'Sir MV', he was awarded the Bharat Ratna in 1955 for his immense contribution to India's early infrastructure development, education and social welfare. M Visvesvaraya was born in 1861 at Chikkaballapur, on the outskirts of Bengaluru. Both his parents were well-known Sanskrit scholars. M Visvesvaraya did his primary education in his hometown but later moved to Bengaluru for higher education. After completing his undergraduate degree in Arts, M Visvesvaraya changed track and went for a degree in civil engineering from the College of Engineering in Pune.

On #EngineersDay, I salute our talented & skilled engineers who have contributed significantly in the development of nation. India is proud of their pioneering works all across the world. pic.twitter.com/kW19M5nJpW

Railways and Industry minister Piyush Goyal wrote on Twitter, "Tributes to Bharat Ratna Sir M. Visvesvaraya on his birth anniversary. An exemplary engineer and a great nation builder, he also played a crucial role in expanding Railway lines in parts of Southern India...".

An exemplary engineer and a great nation builder, he also played a crucial role in expanding Railway lines in parts of Southern India.

Best wishes to all engineers on #EngineersDay. pic.twitter.com/9VUyPLyYNU

Prakash Javadekar paid his respect to M Visvesvaraya and posted a video of "one of the engineering marvels" - India's first vertical lift railway sea bridge.

Engineers form the backbone of any society.On #EngineersDay ,I pay rich tributes to the visionary & pioneering engineer, Shri M. Visvesvaraya.

Have a look at one of the engineering marvel being built by the engineers of #NewIndia - India's 1st vertical lift railway sea bridge. pic.twitter.com/z2BNVDhmxB

Tributes to legendary engineer,Bharat Ratna, Sh M. Visvesvaraya on his birth anniversary & best wishes to all engineers on #EngineersDay.
Our engineers contribute immensely in nation building wd their ingenuity & innovations & bring abt transformational changes,leading to growth.

M Visvesvaraya was one of the first in India to think about irrigation techniques and flood disaster management. He became famous for his pioneering work in flood control measures. As the Diwan of Mysore, M Visvesvaraya founded the Mysore Soap Factory, Bangalore Agricultural University, State Bank of Mysore and Mysore Iron and Steel Works. The companies provided employment to thousands of people. He also founded the Government Engineering College, now known as University Visvesvaraya College of Engineering.