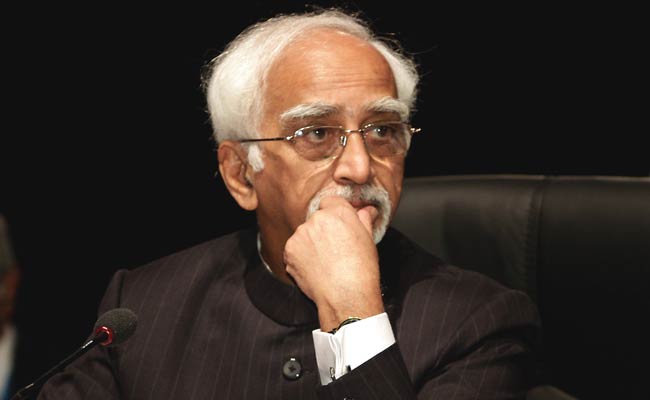 Mr Ansari, who is in Cambodia for a three-day trip, travelled to Siem Reap province from the Cambodian capital of Phnom Penh to visit Angkor Wat, Ta Prohm temples and the Mekong-Ganga Textile museum.

Soon after his arrival in Siem Reap, Mr Ansari visited the museum which was set up under the Mekong Ganga Cooperation initiative after former Prime Minister Atal Bihari Vajpayee announced a grant of USD 1 million for it.

After spending time at the museum, Mr Ansari then visited the Angkor Wat temple which is visually, architecturally and artistically breathtaking.

It is a massive three-tiered pyramid crowned by the five lotus-like flowers rising 65 metres from the ground level.

Cambodia had this year lodged a protest with India in June over a private trust's plans to build an Angkor Wat replica in Bihar, saying it "seriously violates" the 12th century Hindu temple and a world heritage property which holds exceptional and universal value.

The protest came after Cambodia's Ministry of Foreign Affairs and International Cooperation received a report about Patna-based Mahavir Mandir Trust's plans to construct a replica of the largest Hindu temple complex in the world.

Ahead of Mr Ansari's visit, India had allayed Cambodian concerns over the temple being built in Bihar.

"Angkor Wat Temple is the heart of Cambodia, and the Indian government stated that this construction won't break the good relationship between both countries, and they promise to stop the company which plans to build it," Foreign Ministry spokesman Chum Sounry was quoted as saying by the Cambodian media last week after Indian Ambassador to Cambodia Naveen Srivastava's meeting with Deputy Prime Minister Hor Namhong.

"The Ambassador told the Deputy Prime Minister that the government of India advised the private company to change the style and structure (in the blueprint) in order to avoid copying from Cambodia's Angkor Wat temple," the spokesman was quoted as saying.

The 'Viraat Ramayan Mandir', to be built some 120 kms from Patna, will be 2,800 feet in length and 1,400 feet in width and its sanctum sanctoram shall be 405 feet in height, according to details available on the Trust's website.