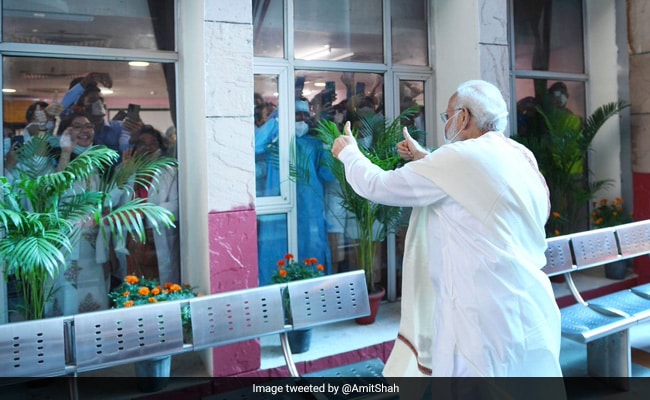 The Congress on Friday hit out at Prime Minister Narendra Modi accusing him of misleading the country on vaccinations when only 21 per cent of the country's population was fully vaccinated.

The opposition party asked the Prime Minister to bring out a white paper on how his government intends to vaccinate all adults by year-end, a promise made by him earlier.

Congress spokesperson Gourav Vallabh also alleged that the Prime Minister, in his address to the nation on Friday, did not talk about issues of inflation and terrorism confronting the country.

He said that instead of offering condolences to the families of 4.53 lakh people who lost their lives due to the coronavirus, the Prime Minister is celebrating.

"The Prime Minister should talk about the issues confronting the nation, but instead he is celebrating 'Mahotsava'. The PM touched issues in a wrong manner and shared wrong data while trying to mislead the country," he told reporters.

Mr Vallabh also alleged that "the PM gave the data which is semi-baked, as half-truth is very dangerous".

The Congress leader said there are only two countries having more than 50 crore population and the claim that India is the first country to achieve 100-crore plus vaccinations is "false" as China had achieved 216 crore doses of vaccinations in September.

"We would like to ask the Prime Minister that it would have been nice if he had shared when we are going to start vaccinations for our school-going and college-going students. It would have been good if the PM answered when his promise of the entire population would be fulfilled by December 31, 2021.

"Please share a white paper on how we are going to receive 106 crore vaccines in the next 70 days to vaccinate our entire adult population," Mr Vallabh said.

He said that "we thought he would talk about inflation because from January 1 till date there is a hike in (price of) diesel by 29 per cent and petrol by 27 per cent".

"Is there anybody on this earth except the Prime Minister's few friends whose income level has increased in last nine months by 29 per cent," he asked.

"We were expecting you to speak on the issue when innocents were killed in Jammu and Kashmir, including 32 persons murdered in the last two weeks and nine soldiers made supreme sacrifice saving our motherland. But the Prime Minister does not have time for any of such things.

"We were expecting that the Prime Minister would offer condolences to the families of people who lost their lives due to coronavirus. He has no time for them and instead he is celebrating Mohatsavs," Mr Vallabh said.

When 4.53 lakh people died due to COVID-19, the government was busy in celebrating Mohatsavs, he alleged.

"When the PM addresses the nation, people expect that the Prime Minister will speak on something that is of their use, which affects their lives like inflation and terrorism. We expected you would offer condolences to the deceased's families, but you did not do that," he said.

A day after India crossed the milestone of 100 crore Covid vaccine doses, Prime Minister Narendra Modi on Friday said the country's vaccination programme was "science-born, science-driven and science-based", and asserted that it had been ensured there was no "VIP culture" in the drive.

In an address to the nation, the Prime minister said there is confidence in the country on Friday . From various strata of society to the economy, at every level and everywhere, there is "optimism, optimism and optimism", he said while also emphasising that people should not drop their guard during the festive season and continue with Covid appropriate behaviour such as masks.