Observing that the faith of a person was intrinsic to a person's meaningful existence, the Supreme Court said that choosing a faith is the substratum of individuality and sans it, the right of choice becomes a shadow. 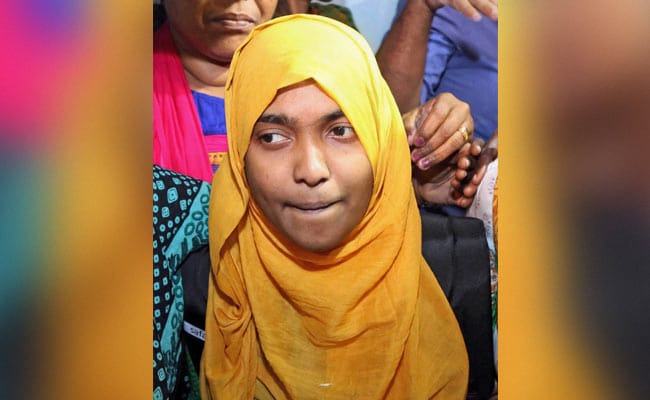 New Delhi: The Supreme Court has set aside the Kerala High Court verdict and restored the inter-faith marriage of Hadiya and Shafin Jahan, saying the former had "absolute autonomy over her person." Observing that the faith of a person was intrinsic to a person's meaningful existence, the top court said that choosing a faith is the substratum of individuality and sans it, the right of choice becomes a shadow.

A bench of Chief Justice Dipak Misra and Justices A M Khanwilkar and D Y Chandrachud, which gave two separate but concurring verdicts, said the "expression of choice in accord with law is acceptance of individual identity".

"Faith of a person is intrinsic to his/her meaningful existence. To have the freedom of faith is essential to his/her autonomy; and it strengthens the core norms of the Constitution," the bench said in its detailed verdict which was uploaded on the apex court's website today.

The Supreme Court had on March 8 set aside the high court verdict which had held as null and void the marriage between Jahan and Hadiya, who had appeared before the court and had categorically stated that she had converted to Islam and married him on her own free will.

Referring to the Hadiya's father contentions, the top court said he may feel there was "enormous transgression" of his right to protect the interest of his daughter but his viewpoint cannot be allowed to curtail her fundamental rights.

"Therefore, the High Court has completely erred by taking upon itself the burden of annulling the marriage between the appellant and the respondent no.9 (Hadiya) when both stood embedded to their vow of matrimony," it said, adding that the freedom was both a constitutional and a human right.

"Deprivation of that freedom which is ingrained in choice on the plea of faith is impermissible," it said.

The top court said the realisation of a right is more important than the conferment of the right and such actualisation indeed ostracised any kind of societal notoriety and kept at bay the patriarchal supremacy.

"It is so because the individualistic faith and expression of choice are fundamental for the fructification of the right. Thus, we would like to call it indispensable preliminary condition," the chief justice, who penned the verdict for himself and Justice Khanwilkar, said.

The bench said that non- acceptance of Hadiya's choice would simply mean creating discomfort to the constitutional right by a Constitutional Court which is meant to be the protector of fundamental rights.

"Such a situation cannot remotely be conceived. The duty of the court is to uphold the right and not to abridge the sphere of the right unless there is a valid authority of law. Sans lawful sanction, the centripodal value of liberty should allow an individual to write his/her script. The individual signature is the insignia of the concept," it said.

Justice Chandrachud, who wrote a separate concurring order, said that choice of a partner whether within or outside the marriage lies within exclusive domain of each individual and intimacies of marriage "lie within a core zone of privacy, which is inviolable".

"The right to marry a person of one's choice is integral to Article 21 of the Constitution. The Constitution guarantees the right to life. This right cannot be taken away except through a law which is substantively and procedurally fair, just and reasonable," he said.

Justice Chandrachud also said the strength of Indian Constitution lay in its acceptance of plurality and diversity of culture and courts were duty bound not to "swerve" from the path of upholding the pluralism and diversity as a nation.

"Intimacies of marriage, including the choices which individuals make on whether or not to marry and on whom to marry, lie outside the control of the state. Courts as upholders of constitutional freedoms must safeguard these freedoms," he said.

He said that interference by the state in such matters has a seriously chilling effect on the exercise of freedoms and others were dissuaded to exercise their liberties for fear of the reprisals which may result upon free exercise of choice.

"The chilling effect on others has a pernicious tendency to prevent them from asserting their liberty. Public spectacles involving a harsh exercise of state power prevent the exercise of freedom, by others in the same milieu. Nothing can be as destructive of freedom and liberty. Fear silences freedom," he said.

Justice Chadrachud said the high court had transgressed limits of its jurisdiction in issuing a declaration annulling their marriage in the course of hearing of a habeas corpus petition.

"The schism between Hadiya and her father may be unfortunate. But it was not part of the jurisdiction of the High Court to decide what it considered to be a 'just' way of life or 'correct' course of living for Hadiya. She has absolute autonomy over her person," he said, adding that the high court had entered into a domain which was alien to its jurisdiction in a habeas corpus petition.

Promoted
Listen to the latest songs, only on JioSaavn.com
The top court clarified that the National Investigation Agency, which was earlier asked by the court to probe into the matter, might exercise its authority in accordance with the law but validity of the marriage shall not form the subject matter of the probe.