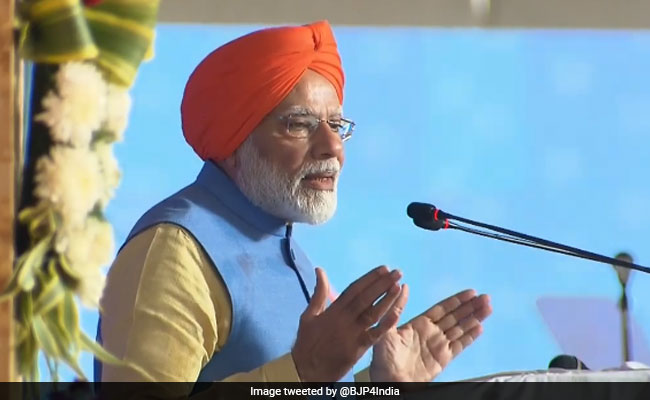 Gurpurab: PM Modi during the inauguration of Kartarpur corridor ahead of Guru Nanak Dev Jayanti.

Prime Minister Narendra Modi on Tuesday wished the nation on the 550th birth anniversary of Sikhism founder Guru Nanak Dev. "Today, on the very special occasion of the 550th Prakash Parv of Shri Guru Nanak Dev Ji, my greetings to everyone. This is a day to rededicate ourselves to fulfilling Shri Guru Nanak Dev Ji's dream of a just, inclusive and harmonious society," he tweeted, along with the video of his speech during the inauguration of Kartarpur Corridor, on November 9.

"Guru Nanak Dev Ji taught us the importance of living with true values and also gave an economic system based on honesty and self-confidence," he outlined in the video.

Vice President Venkaiah Naidu also wished people through micro-blogging site and wrote, "I extend my warm greetings and good wishes to the people of our country on the auspicious occasion of the 550th Birth Anniversary of Guru Nanak Dev Ji. #550YearsOfGuruNanakDevJi."

Calling Guru Nanak Devi ji a shining apostle of the sublime spiritual ethos of India, the Vice President was of the view that Nanak truly democratized religion by making spiritual truths easily understandable for the common man.

"He rejected rituals and superstitions and kindled devotion to the Supreme God. Guru Nanak Dev Ji taught ethical and compassionate ways to lead a life of satisfaction and fulfillment. He was an icon of truth, compassion, and righteousness. On this joyous occasion, I pray that the light of wisdom and humanity lit by Guru Nanak Dev Ji will guide us to build a more harmonious, peaceful and compassionate world," Mr Naidu wrote in another tweet on Guru Nanak Jayanti.

Defence Minister Rajnath Singh wrote on Twitter, "I bow to Shri Guru Nanakdev Ji on the auspicious occasion of his 550th jayanti."

I bow to Shri Guru Nanakdev Ji on the auspicious occasion of his 550th jayanti.

Mrs Gandhi said Guru Nanak's teachings of mutual love, truthfulness, brotherhood and righteousness are of eternal relevance having universal and timeless appeal that cut across the sectarian, communal and regional divides.

"His message holds as much true today as it was over 500 years ago when he delivered it. The world needs to follow his teachings to ensure everyone lives in peace and harmony," Mrs Gandhi said in her message.

"I convey my greetings and good wishes to all the Sikh brothers and sisters in India and around the world on the holy and auspicious occasion of the 550th birth anniversary of Guru Nanak Dev Ji Maharaj," she said.

Congress leaders Rahul Gandhi and Priyanka Gandhi Vadra also paid their tributes to Guru Nanak Dev. "Today, our country is in a greater need for the voice of Guru Nanak Dev, who spreads light all over the world," Priyanka Gandhi tweeted in Hindi. Delhi Lieutenant Governor Anil Baijal also greeted people on the occasion. "Guru Nanak Dev preached the idea of 'One God' (Ik Onkar) - oneness among all living beings. His preachings continue to guide us all," Mr Baijal tweeted. Punjab Chief Minister Amarinder Singh paid tribute to the "great teacher who spread the message of humanity, peace, happiness and goodness through his life".

As we celebrate the #550thPrakashPurb of #GuruNanakDevJi, I take this opportunity to pay tribute to the great teacher who spread the message of humanity, peace, happiness & goodness through his life. I extend my best wishes to you & your family on this auspicious occasion. pic.twitter.com/BTdRBBEu0n

Guru Nanak Dev was the founder of Sikhism and the first of the ten Sikh gurus. Gurpurab is a gazetted holiday in India and is a day to remember the teachings of first Sikh Guru Guru Nanak Dev. Guru Nanak Dev's teachings became part of Guru Granth Sahib, the holy book of the Sikhs. Before his death at the age of 70, he appointed Guru Angad as his successor.