Followers of the Dera Sacha Sauda religious sect converged on the city of Panchkula, where a court on Friday found Gurmeet Ram Rahim Singh guilty of rape. 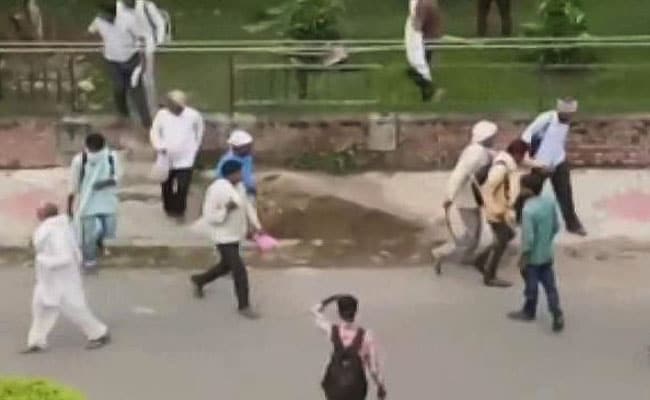 Police was outnumbered by violent protesters in Panchkula after a court found Ram Rahim Singh guilty.

In times of trial a child's place is near the father, they believe. So they went, thousands of obedient sons and daughters marching the roads of India together.

All week, followers of the Dera Sacha Sauda religious sect converged on the city of Panchkula, where a court on Friday found Gurmeet Ram Rahim Singh guilty of raping two followers, according to news reports. Police put the town on a security lockdown, the Associated Press reported.

And, in the wake of the ruling, authorities in both Haryana and the neighboring state of Punjab, also on high alert, were battling against an outbreak of attacks against police and the news media by Singh's supporters. The Press Trust of India, citing hospital officials, said at least five were dead and scores injured as thousands "rampaged" in Panchkula. More than 600 soldiers were deployed to the area.

The sect's leader, known as the "guru of bling," is a cultural heavy-hitter among India's holy men. With a black, Santa-sized beard and a penchant for roaring around on motorcycles, Singh describes himself on Twitter as "Spiritual Saint/Philanthropist/Versatile Singer/Allrounder Sportsperson/Film Director/Actor/Art Director/Music Director/Writer/Lyricist/Autobiographer/DOP."

But the state courts said he was a rapist who took advantage of two followers 14 years ago, charges Singh denied. Over the past couple of weeks, as the verdict neared, masses of his followers - reportedly more than 100,000 of them - arrived in the region, and the city was not ready. In a video appeal before the verdict, Singh asked his supporters not to resort to violence, AP reported.

Panchkula sits on a heat-stunned plain in the northern Indian state of Haryana. The believers pushed in like a wave that refused to break, packing roadsides and laying in the shade from colorful tents stretched over empty fields. They did not leave when the local government said go. They dug in when the state reportedly canceled the region's 29 train runs, shut down the Internet, and put the army on standby.

While the Dera's followers maintained their presence was peaceful and supportive, critics said it amounted to threat-by-numbers and meant to frighten riot-weary government into lenient verdict.

"It is absolutely an intimidating tactic," Utsav Singh Bains, an attorney representing the two victims, told NDTV this week. "This is a subversion of justice. You cannot put any kinds of pressure on a judicial system as a means to intimidate."

If anything, however, the situation in Panchkula illustrates how intractable the guru world remains in India's globalizing social and political circles.

The sect's own start reaches back to April 1948, when the organization was founded to "encourage spiritual awakening among the masses, to uplift humanity, and to create a better world," according to the Dera's website. The same site defines the Dera as a "Social Welfare & Spiritual Organization that preaches and practices humanitarianism and selfless services to others."

Singh, born in 1967, took over the quasi-religious organization in September 1990. The organization's website says under his run the "Dera has undertaken 133 social welfare activities like helping in road accidents and working for the protection of daughters from heinous fetal murder and solemnizing the marriages of harlots by inspiring them to quit this abhorrent profession."

The guru brought a rhinestone flash to holy work. According to the Times of India, Singh is an avid sportsman ("volleyball, kabaddi, lawn tennis, cricket, football, billiards, table tennis, snooker, basketball, water polo and others"), has written, directed and starred in three feature films, and holds 57 world records (including, according to India Today, "creating world's largest vegetable mosaic" and organizing the "largest eye screening camp").

But Singh has also been dogged by allegations of criminal behavior.
The Hindustan Times has reported the rape allegations stem from a three-page anonymous letter written in 2002 by a Dera follower. The letter, addressed to a local and national authorities, accused the guru of rampant sexual misconduct with followers at his ashram in Sirsa.

According to the Times, 18 followers were questions; two leveled allegations of rape against Singh. One victim reported that "when she entered the Dera chief's sprawling chamber, the doors automatically closed and she found him watching a pornographic movie on a big screen."

Singh was formally charged with rape and criminal intimidation. His trial began September, 2008.

Singh is also being investigated in connection with two homicides: one of his followers as well as a journalist who looked into looked into Dera's activities, according to India authorities and news outlets.
Singh and his organization have steadily rejected all accusations of misconduct. Taken together, the Dera says they represent an effort to undermine the organization.

"For the last 15 years there has been a subterranean string of conspiracy of various forces," Aditaya Insan, a spokesman for the organization, told NDTV this week. "There are people at work that instigate us, there's a drug Mafia at work, there is a political Mafia at work, to create these problems at the Dera."