Residents Moved Out After Gurgaon Building Tilts Due To Heavy Rain

Gurgaon rain updates: A building in Gurgaon has been vacated after it tilted following heavy rain. The area where the building is located was severely flooded yesterday, according to the police. 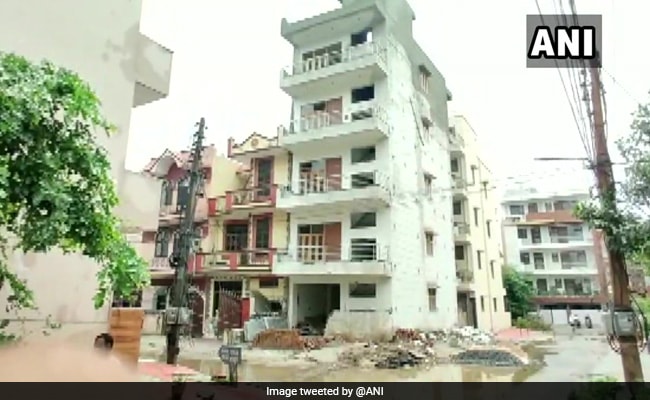 Gurgaon rain news: Building was vacated after it tilted due to heavy rain

The residents of a four-storey house in Gurgaon have been moved out after the building tilted following heavy rain. The building in Sector 46 has been vacated, the police told news agency ANI.

Gurgaon near Delhi, the Millennium City with multiple malls, high-rises and offices of multinational companies, has been severely challenged in two days of heavy downpour. The area where the building is located was severely flooded after yesterday's downpour, according to the police.

Haryana: Police vacated a four-storey building in Gurugram's Sector-46 after it bent on one side, following heavy downpour in the region. https://t.co/VgdYqvYacnpic.twitter.com/D6vJlZyPo2

Earlier today, a part of the major road in near the busy IFFCO Chowk in Gurgaon caved in. No one has been injured. The road has been cordoned off.

Haryana: A portion of road caves in near Gurugram's IFFCO Chowk, following heavy rainfall in the region. pic.twitter.com/tVQVfqEVfl

The last time Gurgaon saw flooding this bad, the authorities had identified 46 flood-prone areas and announced many steps. These included tractor-mounted water pumps, mobile response teams, nearly 400 CCTV cameras, a flood control room and 1,500 traffic policemen for rain emergencies. Residents complain that hardly anything has changed despite these measures.

Gurugram: Severe water-logging at Delhi-Jaipur Expressway after heavy rains in the area. #Haryanapic.twitter.com/oMWTCLVema

The national capital and its adjoining areas like Gurgaon, Faridabad, Ghaziabad, Noida and Greater Noida have been receiving extremely heavy rainfall since Tuesday night, which has caused waterlogging and traffic jams.