Train and road services are set to resume soon, now that the agitators have lifted their blockades. 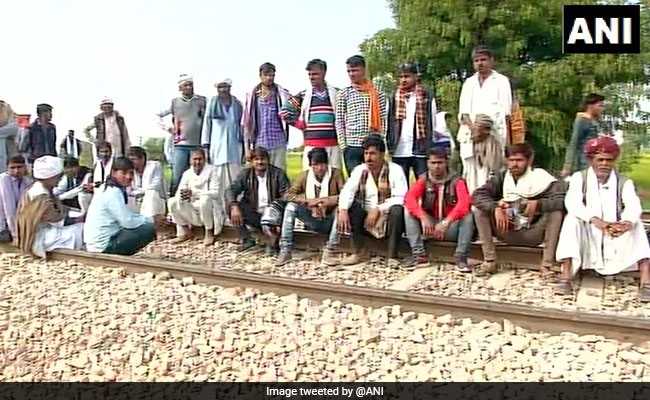 Gujjar protesters had blocked the railway track at Sawai Madhopur during the eight-day agitation.

Gujjar protesters in Rajasthan ended their eight-day-old agitation today, after the state government gave a written assurance that it would take every legal step at its disposal to ensure that the community gets 5% reservation in jobs and educational institutes even if it gets stuck in court.

Although the Ashok Gehlot cabinet had passed a bill in this regard on Wednesday, community leaders said they would call off the agitation only after receiving more clarity on the matter. Today's assurance, however, seems to have finally convinced them. According to reports reaching here, agitators have already vacated the Sawai Madhopur railway track - allowing train services between Delhi and Mumbai to resume.

Protesters led by Gujjar leader Kirori Singh Bainsla had also blocked the Jaipur-Bharatpur national highway, which is crucial for tourists travelling the golden triangle of Delhi, Agra and the Rajasthan capital. Now that the strike has been called off, bus services on the Jaipur-Kota, Jaipur-Agra and Jaipur-Bharatpur routes are expected to be restored by evening.

The state government had unanimously passed the Rajasthan Backward Classes (Amendment) Bill-2019 on Wednesday. The legislation provided Gujjars with 5% reservation in a special category because the government held that circumstances have changed ever since the centre gave 10% reservation to economically weaker sections recently and brought about a constitutional amendment for the same.

The bill sought to increase the backward classes' reservation from 21% to 26% with 5% quota for the Gujjar, Banjara, Gadia Lohar, Raika and Gadaria communities. It said that the need for such a provision was justified because these five communities were the "most backward" in the state.

Soon after the agitation was called off, the Railways issued a notification stating that seven cancelled train services between Rajasthan and southern cities will resume with immediate effect. The Delhi-Mumbai Rajdhani, which has been facing delays of nearly 10 hours due to diversions, will also start running on its usual route shortly.