As soon as the Question Hour came to an end, Mr Mevani suddenly raised a poster that carried the picture of the Dalit man killed on March 2 by a mob. 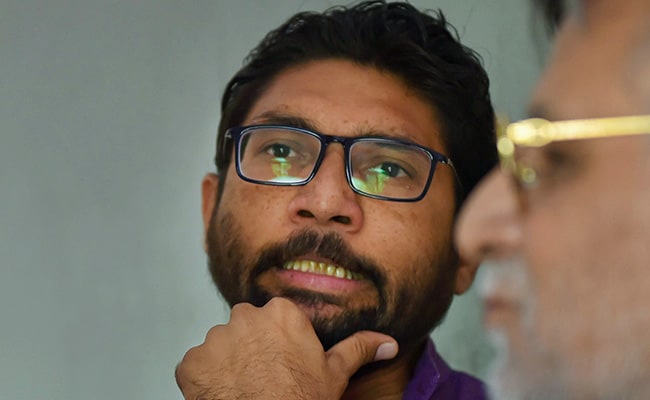 Gujarat's Independent MLA Jignesh Mevani was on Friday suspended from the state Assembly for a day for "indiscipline" after he raised the issue of a Dalit man's murder without the Speaker's permission.

He was evicted from the House on the orders of Speaker Rajendra Trivedi over the issue.

Mr Mevani had been evicted from the Assembly for the same reason on Thursday as well.

As soon as the Question Hour came to an end, Mr Mevani, who represents the Vadgam Assembly constituency, suddenly raised a poster that carried the picture of the Dalit man killed on March 2 by a mob allegedly in the presence of a policeman. The poster read: "Why are you not arresting the
culprits?"

He was referring to the incident, in which one Amrabhai Boricha, 50, a resident of Sanodar in Ghogha taluka of Bhavnagar, was allegedly killed in the presence of a local police sub inspector.

As Mr Mevani's mic was turned off, he started shouting and asked why the BJP government in the state has not arrested the PSI yet.

He asked the government to clarify if the Minister of State for Home Pradeepsinh Jadeja was related to the PSI.

The speaker then asked Mr Mevani not to indulge in "indiscipline" and sit down.

Mr Trivedi told the MLA that he should first seek permission from him if he wanted to raise any issue.

When Nr Mevani did not sit down despite repeated requests, Mr Trivedi asked the sergeants to take the MLA out of the House.