This morning, Hardik Patel had tweeted about "starting a new chapter" and working as a "small soldier" under the leadership of Prime Minister Narendra Modi. 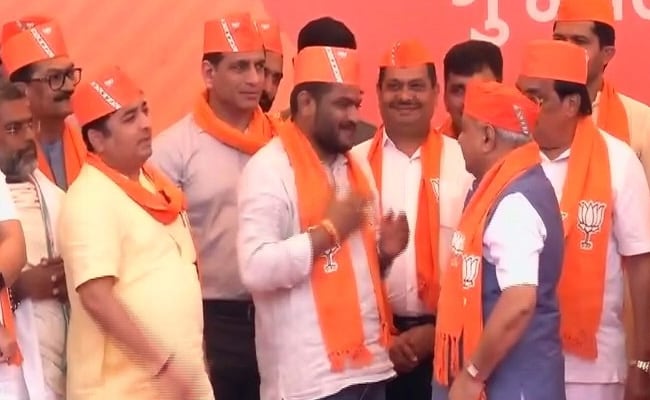 Hardik Patel had until recently denied any plans to join the BJP.

Hardik Patel, who recently quit the Congress, joined the BJP today, months before the Gujarat election. The 28-year-old was welcomed with a saffron scarf and cap at the BJP office in Gujarat's Gandhinagar.

Apart from state BJP chief CR Patel, no senior BJP leader was present at Hardik Patel's induction, hinting at dissatisfaction in the ranks over the brand new recruit who spent a greater part of his three years in politics fiercely criticising the BJP and its top leadership, including Prime Minister Narendra Modi and Union Home Minister Amit Shah.

Later, Hardik Patel ducked questions on his 180-degree, that too months before the state polls.

Would he apologise to PM Modi and Amit Shah for his past remarks? "We were aggressive during the (Patidar) agitation, but later after Article 370 was abolished I thanked the Home Minister too. Rhetoric during the agitation was different, the reality is different," he said.

While leading a Patidar agitation for quota in 2015, he had repeatedly targeted the BJP with videos and public rallies. The agitation resulted in the exit of then Chief Minister Anandiben Patel.

When he was caught in a "sex CD" scandal, he blamed it on the BJP.

As recently as in December, Hardik Patel had tweeted about "fighting against the dirty politics of RSS and BJP".

The Patidar leader prepped the stage for his big switch by tweeting about "a new chapter" and working as a "small soldier" under the leadership of PM Modi.

"I am about to start a new chapter with feelings of national interest, regional interest and social interest. I will work as a small soldier in the massive work in national service under the leadership of Prime Minister Narendra Modi," he tweeted in Hindi this morning.

Hardik Patel joined the Congress in 2019, just before the Lok Sabha election. While quitting the party earlier this month, he targeted the man who took him on board – Rahul Gandhi. "Top leaders", he wrote in the letter, were distracted by their mobile phones and Gujarat Congress leaders were more interested in arranging chicken sandwiches for them.

The Congress had sidelined the young activist-politician for a while, which drove him to a public rant about feeling like a "groom forced into nasbandi (vasectomy)".