In a letter to Chief Minister Mamata Banerjee, the governor said that implication of innocent people in false criminal cases is too serious a matter to be overlooked 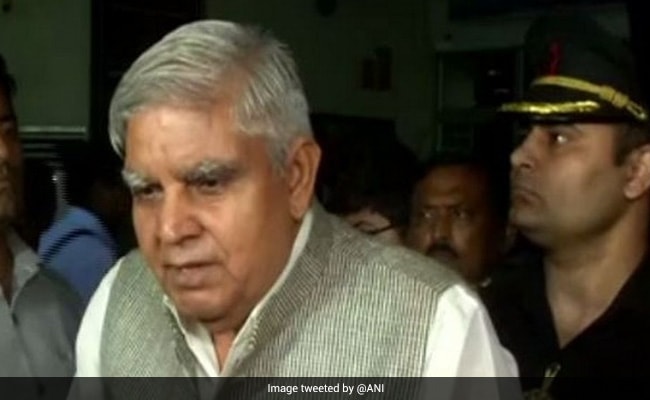 West Bengal Governor Jagdeep Dhankhar on Tuesday claimed that workers of opposition parties in the state are being slapped with false criminal cases including drug-related offences, and called for an "incisive audit" of all cases under the Narcotic Drugs and Psychotropic Substances (NDPS) Act registered since 2016 by the police.

In a letter to Chief Minister Mamata Banerjee, the governor said that implication of innocent people in false criminal cases is too serious a matter to be overlooked and delinquents must be severely dealt with in exemplary manner.

Mr Dhankhar wrote in the letter, which he shared on Twitter, that rule of law and democracy can never approve "state apparatus-inspired implication of innocent citizens in false criminal cases, including heinous ones under the NDPS Act".

"I find it expedient that there should be incisive audit of all cases under NDPS Act since 2016 and a sharp focus needs to be bestowed on all such implications henceforth so as to bolster confidence of the people in rule of law," the letter read.

Drawing the CM's attention to "inputs" that political opponents are being implicated in false cases "to reign their political behaviour", Mr Dhankhar said this worrisome scenario poses serious threat to constitutionalism, democratic governance and rule of law and all concerned are duly accountable for acts of omission and commission."

The governor, who is now on a month-long tour of north Bengal, urged Ms Banerjee to sensitise the administration so that democracy and rule of law prevail in the state.

"A definitive firm indication imparted to police and administration to be 'politically neutral' will go a long way in serving the causes of democracy," Mr Dhankhar said.