Government trying to use CBI to save PM, says Sushma Swaraj 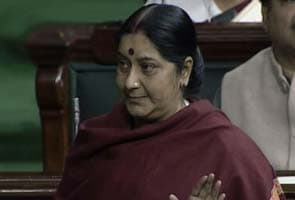 New Delhi: A media report that showed the UPA government had "vetted" the coal scam probe status report before its submission in the Supreme Court was a "very serious matter", said BJP leader Sushma Swaraj Saturday.

Sushma Swaraj alleged that the vetting was part of an attempt to save Prime Minister Manmohan Singh.

"This is a very serious matter. This is evidence of the government's pressure on the CBI (Central Bureau of Investigation) to save the prime minister," Sushma Swaraj said on Twitter.

The news report, published by a national daily, says the CBI report submitted last month had been vetted by Law Minister Ashwani Kumar and officials in the Prime Minister's Office.

It said senior CBI officials, including Director Ranjit Sinha, were summoned by Kumar days before the status report was filed.

During the meeting, several amendments in the status report were suggested and some also incorporated by the CBI, the newspaper added.

India's official auditor had last year revealed that the lack of transparency in the allocation of coal blocks to private players resulted in the loss of a whopping Rs.1.85 lakh crore ($37 billion) to the exchequer as on March 11, 2011.

Promoted
Listen to the latest songs, only on JioSaavn.com
The audit report does not directly indict the prime minister or his office, but during the time these mining blocks were allotted, the coal portfolio was held by Prime Minister Manmohan Singh (between July 2004 and May 2009).