The ruling BJP forced the house to be adjourned before a vote on the opposition's resolution to send the triple talaq bill to a select committee, which will mean that it will not get passed in the current winter session, that ends on Friday

New Delhi: The opposition united today to face off with the government over the triple talaq bill in the Rajya Sabha, stalling a debate as it insisted that a resolution to send it to a parliamentary committee for review be voted on. Amid sloganeering and shouts as the ruling BJP objected to the manner in which the resolution was moved, the house was adjourned for the day.

The bill, which seeks to make instant triple talaq illegal with up to three years in jail as punishment, was passed last week by the Lok Sabha, where the government has a big majority. If it is sent to a select committee by the Rajya Sabha, it will not get passed in the current winter session, which ends on Friday. The chairman of the Rajya Sabha M Venkaiah Naidu and the leader of the house Arun Jaitley met for over half an hour to find an end to the stalemate. The government has to move a resolution to send the bill to a select committee if it wants to find an end to the stalemate.

The government, which made a strong appeal to pass the bill to ensure the practice of Muslim men divorcing their wives by saying talaq thrice is stopped, has said it wants the bill passed in this session and has been pushing for a debate in the upper house to "expose the double standards of the Congress," before an inevitable surrender on account of the opposition's superior numbers in the Rajya Sabha.

Introducing the bill, Law Minister Ravi Shankar Prasad said incidents of triple talaq are still happening despite a Supreme Court order last year that the practice is unconstitutional. He emphasised the need to pass the bill urgently, later saying outside parliament, "The Congress is not ready for a discussion. It wants to keep the bill pending. The double standard of the Congress has been revealed. It is a matter of deep regret." He stressed that passing the triple talaq bill "is a matter of women's dignity."

The Congress insisted that its resolution to refer the bill for further scrutiny be voted on, which was challenged by Finance Minister Arun Jaitley who said the opposition party "was breaking all conventions." 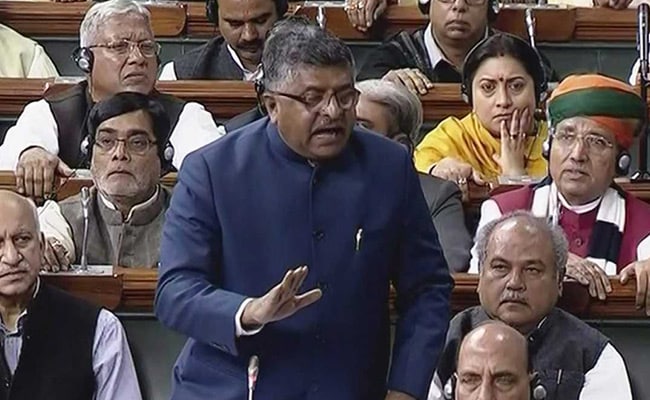 "Parliament can't be a rubber stamp," said the Congress's Anand Sharma, defending his party's move. The Congress was backed by the Left, Mamata Banerjee's Trinamool Congress and the Samajwadi Party. It also has the support on this of parties like the AIADMK and Biju Janata Dal, which usually help the government pass bills in the upper house.

Even the government's own allies like the Shiv Sena and TDP have asked for the bill to be sent to a select committee.

The Congress had last week repeatedly urged the government to refer the bill to a standing committee for review when it came up in the Lok Sabha. It has been careful to underline that it strongly backs any move to abolish the triple talaq, but wants provisions to be strengthened to effectively safeguard the interests of women.

The Congress and other parties have opposed the provision for a three-year jail term in the bill arguing that if a man who abandons his family goes to jail, he will not be able to provide for them. There are also concerns that if the law is passed, it would give anyone the right to complain to the police about the triple talaq to register a case and arrest the man.

Promoted
Listen to the latest songs, only on JioSaavn.com
Dubbing Mr Sharma's motion to set up a select committee as "invalid", Leader of the House Arun Jaitley objected to the procedure followed by him, saying Rule 70 (sub-rule 2a) cited by Mr Sharma was not applicable here because the bill did not originate from the upper house. It originated in the Lok Sabha and was transmitted to the Rajya Sabha.

The other objection Mr Jaitley raised was that the notice for setting up of a select panel was not given before, thereby breaking the parliamentary procedure. "The practice (of triple talaq) was declared unconstitutional on August 22. Two of the judges... held the practice to be unfair. They used their extraordinary power to suspend this practice for six months. Those six months expires on February 22."