The theme was 'Doodle for Google' contest this year was 'When I grow up, I hope'. 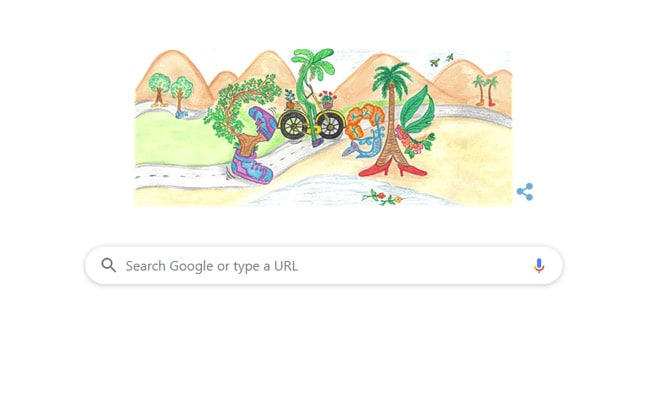 The theme for this year Doodle for Google was 'When I grow up, I hope ...'

Children's Day is celebrated in the country each year on November 14, as a tribute to former Prime Minister Jawahar Lal Nehru who was born in 1889.

Jawahar Lal Nehru, who was also the first Prime Minister of India, is fondly known as Chacha Nehru, among children and was often photographed with them. He always said that as children are the future of the nation they should be nurtured carefully always.

Children's Day in India is being celebrated with a Google doodle drawn by a student and the winner of the 2019 competition in India is Divyanshi Singhal from Gurgaon. The seven-year-old student's Google Doodle themed "Walking Trees" in future, spreads the message on protecting the next generations from Deforestation.

Past 10 years Google has been hosting its Doodle for Google inviting school children to create their own doodle for Google India homepage. The theme for this year was 'When I grow up, I hope ...'

Children's Day or 'Bal Diwas' celebrations aim to spread and increase the awareness about the rights and education of children among people.

Schools across India organise different events and conduct cultural programs for children. Teachers and management participate in various programmes to entertain students. In many schools, the students wear party dresses as part of Children's Day celebrations.

Chidren's Day was earlier celebrated on November 20, coinciding with Universal Children's Day by the United Nations. But after Mr Nehru's death in 1964, a resolution was passed in the parliament wherein it was unanimously decided to celebrate his birthday as Bal Diwas or Children's Day in India.

Jawahar Lal Nehru is also considered as the architect of modern India. One of the eminent leaders of the country during the freedom struggle, he laid the foundation of independent India as sovereign, socialist, secular and a democratic republic.