The doodle illustrates how a rusty remnant can open up a skyful of knowledge and inspiration. 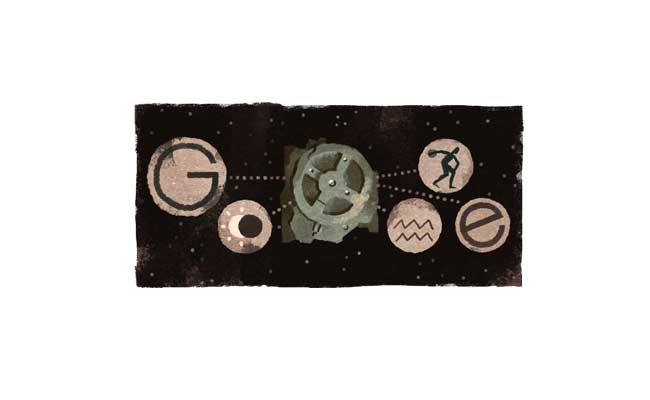 New Delhi: Google today celebrated the 115th anniversay of Antikythera mechanism's discovery with a doodle. The doodle illustrates how a rusty remnant can open up a skyful of knowledge and inspiration.

On this date in 1902, Greek archaeologist Valerios Stais sifted through some artifacts from a shipwreck at Antikythera. The wrecked Roman cargo ship was discovered two years earlier, but Valerios was the first to notice an intriguing bit of bronze among the treasures. It looked like it might be a gear or wheel. That corroded chunk of metal turned out to be part of the Antikythera Mechanism, an ancient analog astronomical computer.

What is the Antikythera Mechanism?

The Antikythera Mechanism tracked planetary positions, predicted lunar and solar eclipses, and even signaled the next Olympic Games. It was probably also used for mapping and navigation. A dial on the front combines zodiacal and solar calendars, while dials on the back capture celestial cycles. Computer models based on 3-D tomography have revealed more than 30 sophisticated gears, housed in a wooden and bronze case the size of a shoebox.

The mechanism was initially dated around 85 BC, but recent studies suggest it may be even older (circa 150 BC). The crank-powered device was way ahead of its time -- its components are as intricate as those of some 18th-century clocks.  The mechanism's remains were found as 82 separate fragments of which only seven contain any gears or significant inscriptions.