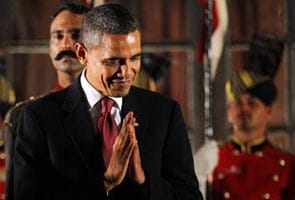 New Delhi: The Left may have staged protests during his visit but US President Barack Obama was "glad" to meet an Indian communist leader last evening.

"I am glad to meet an Indian communist. I am told that communists have been part of the (Indian) political mainstream," Obama told CPM Politburo member Sitaram Yechury at the Rashtrapati Bhawan banquet as they were introduced and both shook hands.

Yechury told Obama that the Indian communists have been in the political mainstream "throughout".

Marking a departure from their past practice, leaders and MPs of the CPM and CPI, known for their anti-US stance, had attended Obama's speech in Parliament last evening.

The CPM leadership had maintained that "as we hear him, he should also listen to the voice of the Indian people and their protests".

But their Left ally, Forward Bloc, had boycotted the speech.

Promoted
Listen to the latest songs, only on JioSaavn.com
Asked about the boycott, Yechury merely said, "That's why we are different parties".

The Left parties had organised protests against the US policies during Obama's visit and asked the government not to succumb to "pressure" from America on strategic and economic issues.