Ghulam Nabi Azad Made Leader of Congress in Rajya Sabha, Set to Become Leader of Opposition 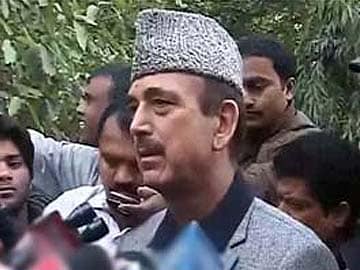 New Delhi: Former Union Minister Ghulam Nabi Azad today appeared all set to become Leader of the Opposition in Rajya Sabha after his appointment as Leader of Congress in the Upper House.

Anand Sharma, another minister in UPA-II, was made Deputy Leader of the party, Congress General Secretary Janardan Dwivedi said.

The two key appointments come on the back of the party making Mallikarjun Kharge, a senior Dalit leader from Karnataka, the Leader of Congress in Lok Sabha and former Punjab Chief Minister Amarinder Singh the party's Deputy Leader in the Lower House.

Mr Azad, who contested the Lok Sabha election from Udhampur in Jammu and Kashmir and lost by over 60,000 votes, is a party veteran and one of the senior most members in the Rajya Sabha.

Congress has announced the name of its Chief Whip and whips in Lok Sabha, while the same for the Rajya Sabha are yet to be announced.

Jyotiraditya Scindia, one of the two Congress MPs from Madhya Pradesh, was made the Chief Whip in Lok Sabha, while Haryana Chief Minister Bhupinder Singh Hooda's son and lone MP from the state Deepender Singh Hooda and Kerala MP K C Venugopal were appointed as whips in the Lok Sabha.

Promoted
Listen to the latest songs, only on JioSaavn.com
In the Rajya Sabha, names of Ghulam Nabi Azad, Digvijay Singh and Anand Sharma were doing rounds for the post of Leader of House.

Mr Dwivedi said, "The Chairperson of Congress Parliamentary Party Sonia Gandhi, exercising her authorisation by the Constitution of the Congress party in Parliament, has nominated Azad as Leader of Congress in Rajya Sabha and Anand Sharma as Deputy Leader."