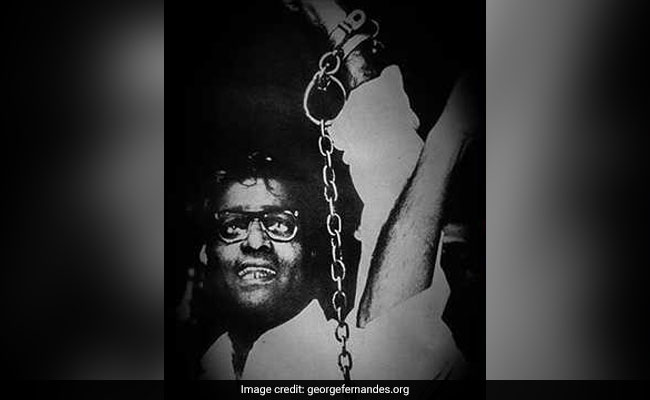 George Fernandes in handcuffs raising his hand in defiance is one of the most enduring photographs of the Emergency era, and a portrait of that iconic image adorns a corner of a room at his home where his body lies in a glass casket.

The oil painting in black and white is surmounted by a board with the message - ''A Leader for Every Indian - George Fernandes'' - while flower petals lay showered beneath that frame kept on a table.

A host of leaders and admirers sat next to that image to pen their tribute in words in a journal kept next to bowls of flower petals.

Padmanabh Shetty, who was one of the persons arrested, along with George Fernandes, in what is known as the Baroda Dynamite case, was among the visitors, who streamed at his house in Delhi's Panchsheel Park, to pay their tribute to the departed leader.

Pointing to the portrait, Mr Shetty said, "George Fernandes in handcuffs raising his hand in defiance, while he was being produced at the Tees Hazari court in Delhi for the trial, is one of the most famous and enduring images of the Emergency era."

Emergency-era activists still recall the black and white photograph of him and the oil painting uses monochromatic hues to recreate that imagery in a new medium.

He was one-of-a-kind, fearless leader and an avowed crusader for democratic rights. This portrait's placement in the room is very apt, Mr Shetty told news agency Press Trust of India.

In the living room, the glass casket is seen buried in a mountain of wreaths and flower petals as a string of senior leaders, veteran politicians and admirers paid tribute to the departed leader.

Another portrait of George Fernades is kept axially behind the casket with a candle next to it, where visitors paid tribute to the former defence minister.

Multiple book shelves fill the room on both sides, with titles on subjects ranging from China, Afghanistan to Parliamentary debates, and multiple copies of a book on the Baroda Dynamite case.

Framed old photographs showing him with family, his swearing-in ceremony as a Union minster, playing with pet dogs, line up the decks of the book shelves.

His wife Leila Kabir showed a portrait. "He loved his dogs. They all died one by one...There he is holding a puppy in his hand in that portrait," she told news agency PTI.

She also recalled his simple sartorial style and said he was "very comfortable in that wear".

She showed another portrait of George Fernandes, in a coat and tie, adding that perhaps it is the only one of him in that avatar. "Even in family functions, he preferred to wear kurta-pyjama, he was quite at ease in those clothes," she said.

A memorial prayer service is being held at George Fernandes' Panchsheel Park residence this morning, before the cremation at the Lodhi electric crematorium at 3 pm. The ashes will be buried at the Christian cemetery on Prithviraj Road tomorrow morning.

The last journey to the crematorium will be in an army vehicle and conducted by the Indian Army in honour of the former Defence Minister. It will begin from his residence at 11 am.